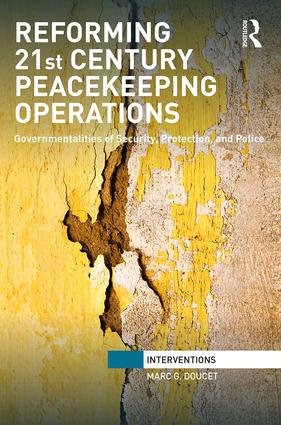 This book considers contemporary international interventions with a specific focus on analyzing the frameworks that have guided recent peacekeeping operations led by the United Nations. Drawing from the work of Michel Foucault and Foucauldian-inspired approaches in the field of International Relations, it highlights how interventions can be viewed through the lens of governmentality and its key attendant concepts. The book draws from these approaches in order to explore how international interventions are increasingly informed by governmental rationalities of security and policing.

Two specific cases are examined: the UN's Security Sector Reform (SSR) approach and the UN's Protection of Civilians agenda. Focusing on the governmental rationalities that are at work in these two central frameworks that have come to guide contemporary UN-led peacekeeping efforts in recent years, the book considers:

This book will be of interest to graduates and scholars of international relations, security studies, critical theory, and conflict and intervention.

'Marc Doucet’s book, Reforming 21st Century Peacekeeping Operations: Governmentalities of Security, Protection, and Police, drawing from the work of Michel Foucault, theorizes about the relationship between the governmental rationality and the UNPKO reform agenda in recent decades. He chooses two specific cases: the SSR model and the UNSC Protection of Civilians (PoC). In one of the chapters entitled Governmentality, sovereign power, and contemporary international peacekeeping operations, Doucet explores key Foucauldian notions, like governmentality, population, biopower and sovereign power.'

The mentality of government

Sovereign power and states of emergency

Police as a figuration of sovereign power

The police-security project of resilience

The governmentality of SSR

The UN’s protection of civilians agenda

The new lawfare of protecting civilians

Rationalizing protection at its point of application

The necropolitics of protection

Marc G. Doucet is an Associate Professor at Saint Mary’s University, Canada. He is the co-editor of Security and Global Governmentality and has published articles in Journal of Intervention and Statebuilding; Security Dialogue; Theory & Event; Contemporary Political Theory; Millennium; Alternatives; and Global Society.