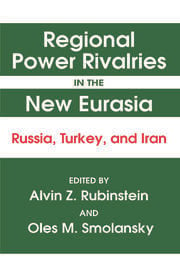 This text discusses the relationship between Russia, Iran and Turkey since the collapse of the Soviet empire. These nations are the main rivals for influence in the Caucasas and Central Asia, with China a distant factor.

The history of reform movements in postwar Eastern Europe is ultimately ironic, inasmuch as the reformers' successes and defeats alike served to discredit and demoralize the regimes they sought to redeem. The essays in this volume examine the historic and present-day role of the internal critics who, whatever their intentions, used Marxism as critique to demolish Marxism as ideocracy, but did not succeed in replacing it. Included here are essays by James P. Scanlan on the USSR, Ferenc Feher on Hungary, Leslie Holmes on the German Democratic Republic, Raymond Taras on Poland, James Satterwhite on Czechoslovakia, Vladimir Tismaneanu on Romania, Mark Baskin on Bulgaria, and Oskar Gruenwald on Yugoslavia. In concert, the contributors provide a comprehensive intellectual history and a veritable Who's Who of revisionist Marxism in Eastern Europe.