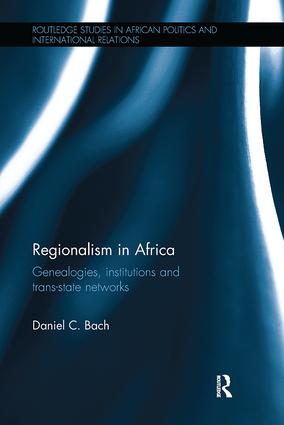 Africa, which was not long ago discarded as a hopeless and irrelevant region, has become a new 'frontier' for global trade, investment and the conduct of international relations.

This book surveys the socio-economic, intellectual and security related dimensions of African regionalisms since the turn of the 20th century. It argues that the continent deserves to be considered as a crucible for conceptualizing and contextualizing the ongoing influence of colonial policies, the emergence of specific integration and security cultures, the spread of cross-border regionalisation processes at the expense of region-building, the interplay between territory, space and trans-state networks, and the intrinsic ambivalence of global frontier narratives. This is emphasized through the identification of distinctive 'threads' of regionalism which, by focusing on genealogies, trajectories and ideals, transcend the binary divide between old and new regionalisms. In doing so, the book opens new perspectives not only on Africa in international relations, but also Africa’s own international relations.

This text will be of key interest to students and scholars of African politics, African history, regionalism, comparative regionalism, and more broadly to international political economy, international relations and global and regional governance.

This is an indispensable book, thoroughly researched, boldly argued, and written with the clarity, sobriety, and refinement of an aesthete. Daniel Bach is equally adept as storyteller and political investigator or strategy analyst. He charts decades of regionalism in Africa while keeping a perceptive eye on all sorts of foreign influences, and weaves with ease throughout several overlapping and conflicting narratives. Whether he recounts the intersecting histories of colonial politics and postcolonial policies or whether he uncovers the hidden rationales of the various stakeholders, Bach chronicles the hijacking and failure of Africa’s most daring slogan, shedding unpleasant lights on the genesis and the perversion of ideals. Célestin Monga, Managing Director, United Nations Industrial Development Organisation (UNIDO)

This study combines analytical sophistication with superb empirical knowledge of both the history and contemporary practices of regionalism in Africa. It draws together the many different dimensions of regionalism, from the power of colonial legacies and the ambiguous implications of dense cross-border transactions to the importance of club diplomacy and regime survival. It is the most important study of regionalism in Africa to have appeared in past decade. Andrew Hurrell, Montague Burton Professor of International Relations, Oxford University

Daniel Bach has long been one of the most original thinkers on Africa's international relations. This book is particularly timely in exploring sympathetically, yet with a keen analytical perspective, the various strands of African regionalism and how governments are using them to transform their integration in the global economy. John Ravenhill, Director, Balsillie School of International Affairs, Waterloo, Canada.

Regionalism remains a dominant trend in African international relations even though regional institutions are plagued by severe political and institutional strains. Yet beyond the quest for functional organizations which furnish order, security, and prosperity, there are many other forms of interactions across Africa that analysts and policymakers seldom give serious attention. Daniel Bach’s Regionalism in Africa succinctly captures these two competing dimensions in Africa’s search for cooperative arrangements. The book provides a magisterial account of the travails and triumphs of integration from the colonial period to the present. It is a critical addition to studies of regional integration in Africa and informs comparative analysis of regionalism elsewhere. Gilbert M. Khadiagala, Jan Smuts Professor of International Relations, The University of the Witwatersrand, Johannesburg, South Africa

This path-breaking book has provided African trade negotiators and political economists with new insights to reflect on their own history and advance a regional integration process within Africa that is consistent with the vision of ‘development integration’ and that is innovative, mutually beneficial and sustainable.… It should be a prescribed book for students of international relations, political economy and African studies. Faizel Ismail, School of Economics, University of Cape Town, South Africa, Book Review in South African Journal of International Affairs, 2016.

Daniel Bach’s compelling arguments about the centrality of borderlands should draw interest from the border scholars’ community. Beyond academia, Regionalism in Africa is accessible to a wider audience and should rapidly occupy a prominent place on the bookshelves of policymakers who aspire to a less fragmented Africa. Olivier Walther, University of Southern Denmark, Denmark, Book Review in Journal of Borderlands Studies, 2016.

… Bach has assembled a book that reads like a whirlwind ride across the African continent, and includes detailed historical, political and sociological accounts of its countries at the micro-, meso- and macro-level, as well as large-scale theory- building efforts… The conceptualization of hysteresis is one of the most fascinating breakthroughs offered by Bach’s book. The importance of this notion lays in the fact that it most effectively represents the critical dialectics through which the African region is being made and un-made… Alessandra Russo, Pisa-based Sant’Anna School of Advanced Studies, Italy, International Politics Reviews, 2016, Vol. 4, No. 1.

… Daniel Bach offers a stellar example of a comprehensive account of explanations and concepts, which are derived from one region but emit relevance far beyond it… This book expertly synthesises the insights Bach has accumulated during decades of research on the political economy of African regionalism, in particular on neo-patrimonialism, transnational networks and regionalisation. The compelling argument that such concepts have explanatory value beyond the African case makes the book stand out from many other studies… Frank Mattheis, University of Pretoria, South Africa, Journal of European Integration, 2017, Vol. 39.

1 A world of regionalisms 2 Amalgamation and hysteresis 3 The politics of economic cooperation 4 The frontier as a resource 5 Trans-state networks and mobile spaces 6 Cognitive maps and holistic agendas 7 Defragementation and connectivity 8 Africa in international relations: the frontier as a concept and metaphor

Daniel Bach is CNRS Director of Research at the Emile Durkheim Centre for Comparative Policy and Sociology, Sciences Po Bordeaux.

The African Politics and International Relations series seeks to provide readers with a conceptual and comparative perspective on transformations associated with the rise of Africa in international relations and within the global economy. The series explores the empirical and theoretical implications of the engagement of both old and new players, the redefinition of the continent's politics, socio-economic transitions and changing patterns of region-building, both within Africa and with the global South. The series, through its focus on the reappraisal of the role and conception of African agency, seeks to provide readers with a comprehensive, accessible, and insightful treatment of issues that challenge conventional understandings and representations of Africa.

Winner of the 2019 ABS past presidents’ book prize.