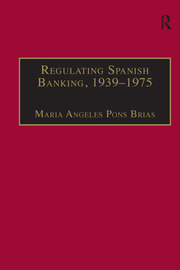 Banking regulation has been the subject of intense debate in recent years. This book contributes to that debate in its study of the impact of financial regulation on Spanish banking performance, especially profitability, from the end of the Spanish Civil War to the end of the Franco regime. Maria Pons discusses the Francoist authorities' policy of forced industrialization based on heavy industry, and the huge interventionist apparatus that it set up to involve banks in its industrialistic programme. This included several items of banking legislation related to the fixing of interest rates, the expansion of the sector, mergers and so forth. Pons explains the emergence of this regulatory framework and its development to the mid-1970s, as well as examining in detail the response of the Spanish banks to these regulations, and their attempts to take advantage of the opportunities they offered to reduce competition and uncertainty. The book also analyzes the 1962 reforms and subsequent legizlation and the lack of success they had in reducing public intervention in the banking sector.

'This work is definitively a qualitative leap in Spanish banking literature, since it provides a theoretical bench-mark that affords a revision of some of the little-known topics regarding the banking regulations of Franco's regime, particularly their reasons and their effects. Not only because of its theoretical proposal, but also due to its use of indicators that demonstrate that the regulation was neither uniform, nor had any similar effects on the banking industry, this book is a valuable reference for understanding the economic policy of the regime as well as the evolution of the Spanish banking industry.' Business History