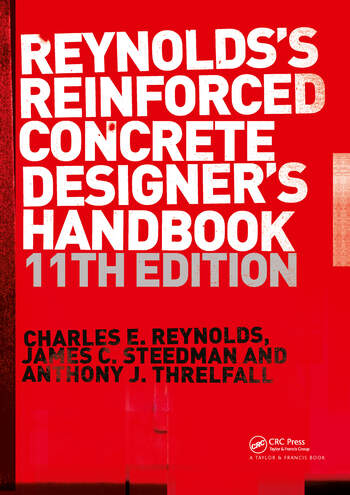 This classic and essential work has been thoroughly revised and updated in line with the requirements of new codes and standards which have been introduced in recent years, including the new Eurocode as well as up-to-date British Standards.

It provides a general introduction along with details of analysis and design of a wide range of structures and examination of design according to British and then European Codes.

Written for structural engineers, contractors, consulting engineers, local and health authorities, and utilities, this is also excellent for civil and architecture departments in universities and FE colleges.

Charles Edward Reynolds was born in 1900 and received his education at Tiffin Boys School, Kingston-on-Thames, and Battersea Polytechnic. After some years with Sir William Arroll, BRC and Simon Carves, he joined Leslie Turner and Partners, and later C W Glover and Partners. He was for some years Technical Editor of Concrete Publications Ltd and then became its Managing Editor, combining this post with private practice. In addition to the Reinforced Concrete Designer’s Handbook, of which almost 200, 000 copies have been sold since it first appeared in 1932, Charles Reynolds was the author of numerous other books, papers and articles concerning concrete and allied subjects. Among his various professional appointments, he served on the council of the Junior Institution of Engineers, and was the Honorary Editor of its journal at his death on Christmas Day 1971.

James Cyril Steedman was educated at Varndean Grammar School and first employed by British Rail, whom he joined in 1950 at the age of 16. In 1956 he began working for GKN Reinforcements Ltd and later moved to Malcolm Glover and Partners. His association with Charles Reynolds began when, after the publication of numerous articles in the magazine Concrete and Constructional Engineering, he accepted an appointment as Technical Editor of Concrete Publications, a post he held for seven years. He then continued in private practice, combining work for the Publications Division of the Cement and Concrete Association with his own writing and other activities. In 1981 he set up Jacys Computing Services, subsequently devoting much of his time to the development of micro-computer software for reinforced concrete design. He is the joint author, with Charles Reynolds, of Examples of the Design of Reinforced Concrete Buildings to BS 8110.

Anthony John Threlfall was educated at Liverpool Institute for Boys after which he studied civil engineering at Liverpool University. After eight years working for BRC, Pierhead Ltd, and IDC Ltd, he took a diploma course in concrete structures and technology at Imperial College. For the next four years he worked for CEGB and Camus Ltd, and then joined the Cement and Concrete Association in 1970, where he was engaged primarily in education and training activities until 1993. After leaving the C&CA, he has continued in private practice to provide training in reinforced and prestressed concrete design and detailing.