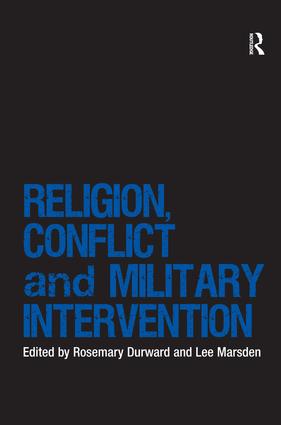 For many years religion has been the neglected component of international relations and yet in an age of globalization and terrorism, religious identity has become increasingly important in the lives of people in the West as well as the developing world. The secularization thesis has been overtaken by an increased desire to understand how religious actors contribute to both conflict and the resolution of conflict. This volume brings an exciting new perspective with fresh ideas and analyses of the events shaping conflict and conflict resolution today. The book uniquely combines chapters highlighting Christian and Islamist theological approaches to understanding and interpreting conflict, as well as case studies on the role of religion in US foreign policy and the Iraq war, with religious perspectives on building peace once conflicts are resolved. The volume provides an ideal starting point for anyone wishing to gain a deeper understanding of the religious character of conflict in the twenty-first century and how such conflict could be resolved.

'It is easy enough to say, "If religion is a part of the problem, it also needs to be a part of the solution", but how can this perspective influence foreign policy and our understanding of international relations? Finally, here is a book that begins to take seriously the actual religious beliefs, values, and practices of religious actors - terrorist groups as well as states, and it brings political theology into our understanding of conflict, terrorism, and military intervention in Iraq, Pakistan, and Afghanistan. However, it also helps us to see more clearly how religion and theology can be used as part of conflict resolution in these countries.' Scott M. Thomas, University of Bath, UK, author of The Global Resurgence of Religion and the Transformation of International Relations '… this symposium is an excellent overview of an important subject area, delivered by specialist writers from diverse backgrounds… This volume dares to explore the Christian justification or otherwise of such interventions and looks through Islamic eyes at the disastrous twenty-first century Western military adventures affecting Iraq, Afghanistan, and Pakistan… a remarkable survey of the social, political, and theological values of Pakistan's tribal areas… brilliantly set out…This indexed symposium 'aims to contribute to mutual understanding and respect' and so to encourage constructive engagement. Largely, it succeeds; I commend it.' Journal of Contemporary Religion

In the twenty-first century religion has become an increasingly important factor in international relations and international security. Religion is seen by policy makers and academics as being a major contributor in conflict and its successful resolution. The role of the Ashgate series in Religion and International Security is to provide such policy makers, practitioners, researchers and students with a first port of call in seeking to find the latest and most comprehensive research on religion and security. The series provides established and emerging authors with an opportunity to publish in a series with a reputation for high quality and cutting edge research in this field. The series produces analytical and scholarly works from around the world that demonstrate the relevance of religion in security and international relations. The intention is not to be prescriptive or reductionist in restricting the types of books that would be appropriate for the series and as such encourages a variety of theoretical and empirical approaches. International security is broadly defined to incorporate inter and intra-state conflict, human security, terrorism, genocide, religious freedom, human rights, environmental security, the arms trade, securitisation, gender security, peace keeping, conflict resolution and humanitarian intervention. The distinguishing feature is the religious element in any security or conflict issue.