Religion, Identity and Conflict in Britain: From the Restoration to the Twentieth Century
Essays in Honour of Keith Robbins 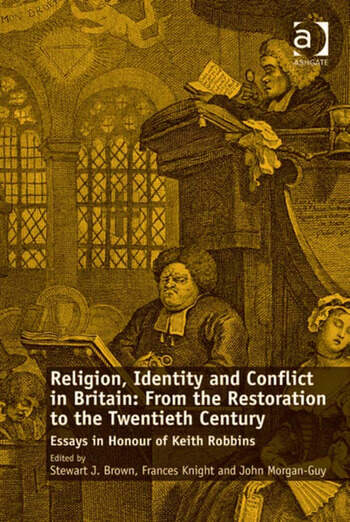 Religion, Identity and Conflict in Britain: From the Restoration to the Twentieth Century: Essays in Honour of Keith Robbins

The British state between the mid-seventeenth century to the early twentieth century was essentially a Christian state. Christianity permeated society, defining the rites of passage - baptism, first communion, marriage and burial - that shaped individual lives, providing a sense of continuity between past, present and future generations, and informing social institutions and voluntary associations. Yet this religious conception of state and society was also the source of conflict. The Restoration of the monarchy in 1660 brought limited toleration for Protestant Dissenters, who felt unable to worship in the established Church, and there were challenges to faith raised by biblical and historical scholarship, science, moral questioning and social dislocations and unrest. This book brings together a distinguished team of authors who explore the interactions of religion, politics and culture that shaped and defined modern Britain. They consider expressions of civic consciousness in the expanding towns and cities, the growth of Welsh national identity, movements for popular education and temperance reform, and the influence of organised sport, popular journalism, and historical writing in defining national life. Most importantly, the contributors highlight the vital role of religious faith and religious institutions in the understanding of the modern British state.

Contents: Introduction; Part I Religion and Identity: Defining Britain and Britishness; an historian’s quest. An appreciation of Keith Robbins, Bruce Collins; The manner of English blasphemy, 1676-2008, John Spurr; The topography of power: elites and the political landscape of the English town, 1660-1760, Peter Borsay; 'Sleep not while the trumpet is blown in Zion': public somnolence, civic values and modern audience in 18th-century Britain, Joris van Eijnatten; A tale of two mirrors: forming an identity for the Calvinistic Methodist Church of Wales, Eryn M. White; Sunday schools and Welsh national identity: an historiographical study, Paula Yates; Evangelicalism and British culture, D.W. Bebbington; Anglican attitudes to Roman Catholicism in the late 18th and early 19th centuries, Nigel Yates. Part II Conflict and Identity: Trials and shadows: Bishop Charles John Ellicott (1819-1905) and ’angry controversies’ in the Church of England, John Morgan-Guy; Recreation or renunciation? Episcopal interventions in the Drink Question in the 1890s, Frances Knight; Reactions to the Didache in early 20th-century Britain: a dispute over the relationship of history and doctrine?, Thomas O’Loughlin; Religion, politics and sport in Western Europe, c.1870-1939, Hugh McLeod; W.T. Stead, the ’new journalism’ and the ’new Church’ in late Victorian and Edwardian Britain, Stewart J. Brown; ’An ambitious venture’: Oxford University Press and The Oxford History of England, Brian Harrison; Select bibliography of the publications of Keith Robbins; Index.

'All [essays] provide useful contextual material for those interested in nonconformist history, for example those on Welsh Sunday Schools, the operation of the Blasphemy Laws, and episcopal attempts at temperance reform, and somnolence during preaching.' Baptist Quarterly ’...set out a frame for future historical studies on religion and society.’ SZRKG - The Swiss Journal of Religious and Cultural History ’The ’parts’ of this volume are each deserving of their honoured place, but, thanks to editorial expertise and focus on and weaving together the various big themes that emerge, the sum is even greater than the parts. The final result is a well-merited scholarly testimony to an accomplished historian and one which deserves close attention from an informed general, as well as academic, readership.’ English Historical Review