Religion Matters
What Sociology Teaches Us About Religion In Our World 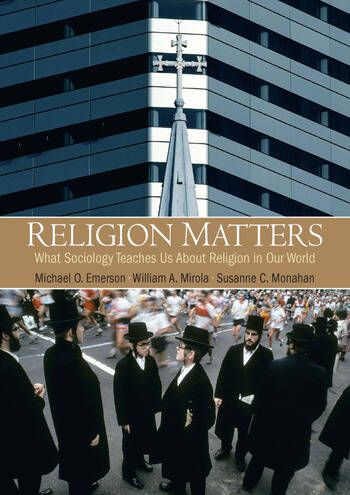 Religion Matters: What Sociology Teaches Us About Religion In Our World

Religion Matters: What Sociology Teaches Us About Religion in Our World

Section I Getting Acquainted 1 Why Religion? 2 "You Believe What?" 3 Downloading God, "Big Box" Churches, and the Crystal Shop Around the Corner Section II The Shape of Religion 4 Why Can’t We All Just Get Along? 5 God’s Not Dead (and Neither is the Goddess!) 6 Our God Rules (Yours Doesn’t) Section III Religion, Conflict and the State 7 Divine rights and casting down the mighty from their thrones 8 Give us our due Section IV Religion, Identity and Social Inequalities 9 Adam, Eve, and Steve 10 The (Not So Great) Color Wall of the U.S. 11 Who Brought the Enchiladas to My Bar Mitzvah? Section V More Big Questions 12 Godless science?  Irrational religion? 13 The end of days?  Religion and environmentalism 14 Do we need God to do good?

Susanne C. Monahan is Associate Professor and former chair of the Department of Sociology and Anthropology at Montana State University.  She received a Ph.D. and A.M. in Sociology from Stanford University, and a B.A. in Sociology/Anthropology and Economics from Swarthmore College.  Her research focuses on complex organizations, including work on American congregations and clergy.  She is co-editor, along with William Mirola and Michael Emerson, of Sociology of Religion: A Reader, and has published articles and reviews in the Journal for the Scientific Study of Religion, Review of Religious Research, Sociology of Religion, Theoretical Criminology, Justice Quarterly, Journal of the American Academy of Religion and Child Development.

William A. Mirola is Professor of Sociology and former chair of the Department of History and Social Science at Marian College in Indianapolis, IN.  His teaching and research interests focus on the sociology of religion, social class, and social movements and change.  In 2009, he co-edited (with Sean McCloud), Religion and Class in America: Culture, History, and Politics.  He is co-editor (with Susanne Monahan and Michael Emerson) of Sociology of Religion: A Reader.  He has published articles in Sociology of Religion, Social Problems, and Social Science History, principally addressing the intersections of religion and social class as well as religious dynamics in the American labor movement, past and present.

Michael O. Emerson is the Allyn and Gladys Cline Professor of Sociology and Co-Director of the Institute for Urban Research at Rice University.  In addition to many articles on the topic of religion, he is the author of several books, including Divided by Faith: Evangelical Religion and the Problem of Race in America (Oxford University Press) and People of the Dream: Multiracial Congregations in the United States (Princeton University Press).

"It is comprehensive and well written. It is for students serious about learning the background of the law."
Becky da Cruz, Armstrong Atlantic University