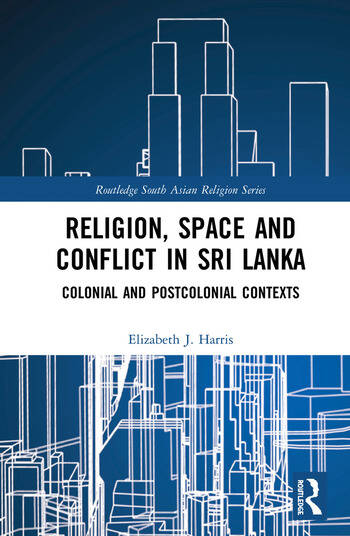 Space is dynamic, political and a cause of conflict. It bears the weight of human dreams and fears. Conflict is caused not only by spatial exclusivism but also by an inclusivism that seeks harmony through subordinating the particularity of the Other to the world view of the majority.

This book uses the lens of space to examine inter-religious and inter-communal conflict in colonial and post-colonial Sri Lanka, demonstrating that the colonial can shed light on the post-colonial, particularly on post-war developments, post-May 2009, when Buddhist symbolism was controversially developed in the former, largely non-Buddhist, war zones. Using the concepts of exclusivism and inclusivist subordination, the book analyses the different imaginaries or world views that were present in colonial and post-1948 Sri Lanka, with particular reference to the ethnic or religious Other, and how these were expressed in space, influenced one another and engendered conflict. The book’s use of insights from human geography, peace studies and secular iterations of the theology of religions breaks new ground, as does its narrative technique, which prioritizes voices from the nineteenth and twentieth centuries, and the author’s fieldwork and personal observation in the twenty first.

Through utilizing past and contemporary reflections on lived experience, informed by diverse religious world views, the book offers new insights into Sri Lanka’s past and present. It will be of interest to an interdisciplinary audience in the fields of colonial and postcolonial studies; war and peace studies; security studies; religious studies; the study of religion; Buddhist Studies, mission studies, South Asian and Sri Lankan studies.

Part I: The British Colonial Period

1. The Spatial Component of the Sri Lankan Buddhist Imaginary 1590s to 1815

3. The Spatial Impact of Missionary Schools

4. The Spatial Impact of Church Building

5. British and Buddhist Imaginaries: the Sacred Cities, the Aryan Debate and the Tamil Other

6. Ancient Cities and Narratives of Power

7. Sinhala Buddhist Imaginaries post-1948 and during the Ethnic War

9. Spatial Change and Competition after the Ending of Armed Conflict

Elizabeth J. Harris is an Honorary Senior Research Fellow within the Edward Cadbury Centre for the Public Understanding of Religion, University of Birmingham. She is President of the European Network of Buddhist-Christian Studies and has published widely within Buddhist Studies and Inter-Religious Studies, including Theravāda Buddhism and the British Encounter: Religious, missionary and colonial experience in nineteenth century Sri Lanka (Routledge, 2006).