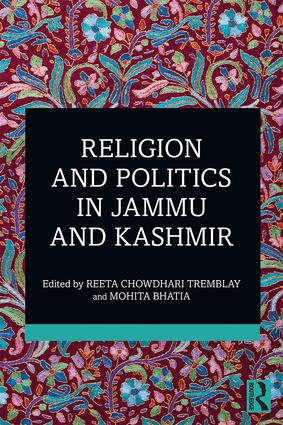 Religion and Politics in Jammu and Kashmir

This book examines the shifting, non-linear relationship between religion, nationalism, and politics in the state of Jammu and Kashmir, India. In the wake of the revocation of Article 370, the state’s plural and relatively harmonious society has come under multiple strains, with religion often informing day-to-day politics.

The essays in this volume:

Religion and Politics in Jammu and Kashmir

will be an indispensable read for students and researchers of religion and politics, democratisation and democracy, secularism, sociology, cultural studies, and South Asian studies.

Mohita Bhatia is a postdoctoral fellow at the Centre for South Asia, Stanford University, California, USA. She was formerly Assistant Professor at the Centre for the Study of Discrimination and Exclusion, Jawaharlal Nehru University, Delhi, India. Her research interests include the ethnography of ethno-national conflicts, migration, refugees and border making. She has published in journals such as Asian Survey and Economic and Political Weekly. She is the author of Retelling conflict in Jammu and Kashmir: Marginal Hindu Communities and Politics in Jammu (forthcoming).

is Professor of Comparative Politics and former Provost/Vice-President Academic at the University of Victoria, Canada. Her research interests include identity-based politics, secessionist movements (Kashmir) in South Asia, and the politics of subaltern resistance and accommodation in post-colonial societies. Her recent publications include Modi’s Foreign Policy (2017), as well as "Contested Governance, Competing Nationalisms, and Disenchanted Publics: Kashmir beyond Intractability?" (2017).