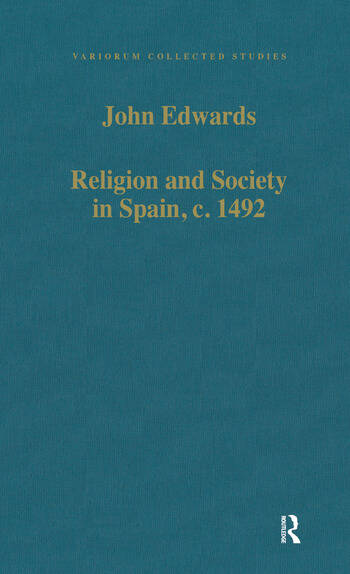 The articles in this volume explore both individual and corporate aspects of religion in Spain during the 15th and 16th centuries - Jewish, Christian and Muslim. John Edwards looks in particular at the status, experience, and attitudes of the conversos, those who had converted to Christianity to avoid expulsion from Spain, and at the activities of the Inquisition. In the second part of the book he expands his analysis to examine the social, economic, and political basis of religious conflict in the period. The primary focus of the book is on the cities of Andalucia, Cordoba above all, but its concerns extend to Castile and Aragon as well.

Contents: Introduction; The conversos: a theological approach; Why the Spanish Inquisition?; Religious faith and doubt in late medieval Spain: Soria, circa 1450-1500; Debate: religious faith, doubt and atheism, with a contribution by C. John Sommerville; Male and female religious experience among Spanish New Christians, 1450-1500; The popes, the Inquisition and Jewish converts in Spain, 1440-1515; Jews and conversos in the reign of Soria and AlmazÃ¡n: departures and returns; The beginnings of a scientific theory of race? Spain, 1450-1600; Elijah and the Inquisition: messianic prophesy among conversos in Spain, c. 1500; Trial of an Inquisitor: the dismissal of Diego RodrÃ­guez Lucero, Inquisitor of CÃ³rdoba, in 1508; Bishop Juan Arias DÃ¡vila of Segovia: ’Judaizer’ or reformer?; Christian mission in the Kingdom of Granada, 1492-1568; Jewish testimony to the Spanish Inquisition: Teruel, 1484-87; Religion, constitutionalism and the Inquisition in Teruel, 1484-85; Oligarchy and merchant capitalism in Lower Andalusia under the Catholic kings: the case of CÃ³rdoba and Jerez de la Frontera; Politics and ideology in late Medieval CÃ³rdoba; ’Development’ and ’underdevelopment’ in the Western Mediterranean: the case of CÃ³rdoba and its region in the late 15th and early 16th centuries; Conversos, Judaism and the language of monarchy in 15th-century Castille; The Judeoconversos in the urban life of CÃ³rdoba, 1450-1520; Index.