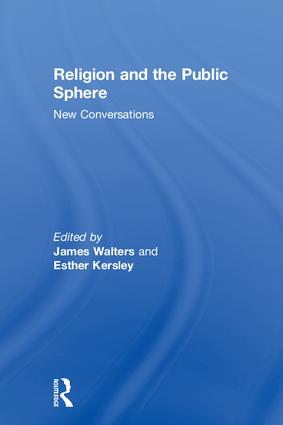 Religion and the Public Sphere

Religion and the Public Sphere: New Conversations explores the changing contribution of religion to public life today. Bringing together a diverse group of preeminent scholars on religion, each chapter explores an aspect of religion in the public realm, from law, liberalism, the environment and security to the public participation of religious minorities and immigration. This book engages with religion in new ways, going beyond religious literacy or debates around radicalisation, to look at how religion can contribute to public discourse. Religion, this book will show, can help inform the most important debates of our time.

'This volume assembles key figures in the analysis of contemporary religious dynamics to stimulate new conversations about the role of faith in modern societies. They contend that academic and public discourses are more effective at addressing global problems when they bring an analysis of religion to the fore. In an era in which the secularisation thesis has failed, where geo-political crises often intersect with religious identities, but where faith actors also play an increasing role in social welfare and reform, such a conversation is timely if not essential.'

'Ultimately, then, Religion and the Public Sphere: New Conversations offers exactly what a speaker series should aim to offer—a series of contributions that all revolve around the same fundamental questions—namely, what is the nature of religious belief and belonging in the modern secular West and what is the role of the state in shaping or managing religious pluralism?—but to sometimes starkly divergent ends. In so doing, the volume simultaneously announces the importance and intellectual priorities of the LSE Faith Centre while advancing scholarship of secularism and religious pluralism on several fronts at once.'

Reimagining Academic Understanding of Religion in the Public Sphere

Dialogue: The Future of Faith

Equality for Secular Belief and Minority Faiths? Reflections on the Commission on Religion in British Public Life

Dialogue: Religion and the Environment

The Genesis of Strategy: How to Stop Killing in the Name of God

James Walters is Director of the LSE Faith Centre, Senior Lecturer in Practice at the LSE Marshall Institute and a Senior Fellow of the LSE Institute of Public Affairs, UK.

is the Research Officer for Religion and the Public Sphere at the LSE, UK.