Religions and Missionaries around the Pacific, 1500–1900 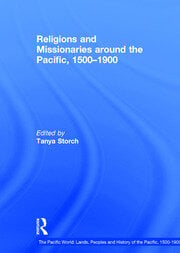 Religions and Missionaries around the Pacific, 1500–1900

This volume takes an interdisciplinary approach to the study of religious cultural exchanges around the Pacific in the period 1500-1900, relating these to economic and political developments and to the expansion of communication across the area. It brings together twenty-two pieces, from diaries of religious exiles and missionary field observations, to studies from a variety of academic disciplines, so enabling a multitude of voices to be heard. The articles are grouped in sections dealing with the Islamic period, the Iberian Catholic period, the Jewish diaspora, the Russian Orthodox church, the epoch of Protestant culture and finally Asian immigrant religions in the West; a substantial introduction contextualizes these chapters in terms of both historical and contemporary approaches.

Contents: Introduction, Tanya Storch. Part 1 The Islamic Period: Islam in the Netherlands East Indies, Radan Abdulkadir Widjojoatmodjo; The role of Islam in the political development of Malaysia, Gordon Means; Filipinos before the Spanish conquest possessed a well-ordered and well-thought-out religion, Gregorio F. Zaide. Part 2 The Iberian Catholic Period: Merchants and missionaries: a theologian's view on clerical involvement in the Galleon trade, Nicolas Cushner; French Catholic missionaries in Japan in the Bakumatsu and early Meiji periods, Jean-Pierre Lehman; Did Jesus Christ really come to China?, Claudia von Collani; Some observations on mission methods and native reactions in 16th-century new Spain, Stafford Poole; Shamans and Padres: the religion of the southern California mission Indians, Martha Voght; The Philippine inquisition: a survey, F. Delor Angeles. Part 3 Ages of the Jewish Diaspora: The narrative of Aharon Levi, alias Antonio de Montezinos, tr. by E. Lindo; Delving into Israelite religion of Kaifeng: the patriotic scholar Shi Jungxun and his study of the origins of the Plucking of the Sinews Sect of Henan, Kong Xianyi. Part 4 Two Centuries of Russian Orthodoxy: The Orthodox Church and Orthodox Christian mission from an Alaskan perspective, Michael Oleksa; Russian Orthodox brotherhoods among the Tinglit: missionary goals and native responses, Sergei Kan. Part 5 The Protestant Period: Patterns of ministry in Methodism in Singapore and Malaysia, Theodore Doraisamy; A successful crusade to China: the Home Board and the China Mission of the Methodist Episcopal Church, South, 1848-1900, Xiaoguang Xu; 'Our duty to convert men-eaters and cannibals': German Lutheran missionaries and their work in Australia and New Guinea before 1914, Jurgen Tampke; The Mormon message in the context of the Maori culture, Peter Lineham; The impact of missionary Christianity upon marginalized ethnic minorities: the case of the Hmong, Nicholas Tapp. Part 6 The Asian Migratio

Tanya Storch is Assistant Professor of Religious Studies at the University of the Pacific, USA.

’... Religions and Missionaries around the Pacific is a valuable addition to an important series focusing on the Pacific world. The series should be purchased by research libraries for use of scholars at all levels, from undergraduate to post-doctoral.’ Itinerario ’... this is a wide-ranging collection that touches on many issues and brings together a number of essays that might otherwise be difficult to obtain... There is a valuable introduction by the editor highlighting some of the important themes that emerge from the collection.’ Anglican and Episcopal History