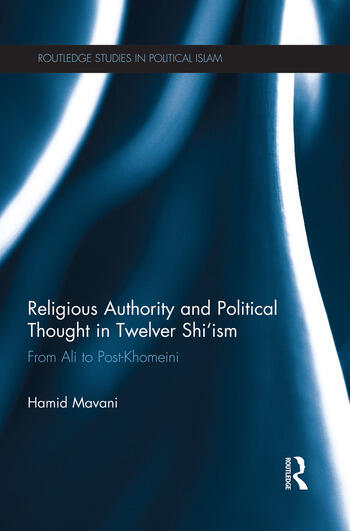 Religious Authority and Political Thought in Twelver Shi'ism: From Ali to Post-Khomeini

Ranging from the time of the infallible Imams, to the contemporary era, this book provides a comprehensive overview of Shi’i religious and political authority, focusing on Iran and Lebanon, without limiting the discourse to Khomeini’s version of an Islamic State.

Utilising untapped Arabic and Persian sources, Hamid Mavani provides a detailed, nuanced, and diverse theoretical discussion on the doctrine of leadership (Imamate) in Shi’ism from traditional, theological, philosophical, and mystical perspectives. This theoretical discussion becomes the foundation for an analysis of the transmission of the Twelfth Imam’s religious and political authority vis-á-vis the jurists during his Greater Occultation.

Bringing the often overlooked diversity within the Shi’i tradition into sharp focus, Religious Authority and Political Thought in Twelver Shi’ism discusses what constitutes an Islamic state, if there is such a notion as an Islamic state. Hamid Mavani further explores the possibility of creating a space for secularity, facilitating a separation between religion and state, and ensuring equal rights for all. This book argues that such a development is only possible if there is a rehabilitation of ijtihad. If this were to materialise modern religious, social, economic, political, and cultural challenges could be addressed more successfully. This book will be of use to scholars and students with interests ranging from Politics, to Religion, to Middle East Studies.

Introduction 1 The Ethos of Shi’ism 2 Approaches to the Imamate: Traditional, Theological, Philosophical and Mystical 3 Mode of Succession and Imam's Policy vis-a-vis the Rulers 4 Shi'i State Models during the Major Occultation 5 Khomeini's Concept of Governance and its Critique 6 The Case for Secularity in Islam: Traditional and Foundational Ijtihad Conclusion

is Assistant Professor of Islamic Studies at Claremont Graduate University, Department of Religion. Professor Mavani has spent time at the University of Alberta, the University of Toronto, and McGill University, as well as undertaking specialized, theological training at the traditional seminaries in the Muslim world, such as Egypt, Iran, Iraq, Bahrain, Syria, and Jordan. His primary fields of interest include Islamic legal reform, women and Shi‘i law, Islamic theology and political thought, transnational Islam in Asia, Islam and secularity, intra-Muslim discourse, and Muslims in North America.

"Hamid Mavani's Religious Authority and Political Thought in Twelver Shi‘ism is a timely, judicious, impeccably researched, and vastly learned contribution to our evolving understanding of the thorny issue of ‘authority’ in Islamic political thought. More than thirty years after Ayatollah Khomeini made his specific reading of political authority in Shi'ism the cornerstone of an Islamic state, and at the world-historic moment when Arab revolutions have once again brought that issue to the forefront of our critical attention, Professor Mavani's learned book takes a clear and critical angle that will clarify and enrich our encounter with political Islam." - Hamid Dabashi, Hagop Kevorkian Professor of Iranian Studies and Comparative Literature, Columbia University, USA

"The major contribution of the study is in the field of contemporary Shi’ite politics. Through a meticulous examination of the classical theological and traditional sources Dr Hamid Mavani has demonstrated that Shi’ite religious leadership in Iran and Lebanon is engaged in setting the course of Shi’ite history in modern times. Contemporary Shi’ite history, as Dr. Mavani has shown, is an intricate of amalgam of pragmatics and multidimensional response to the Shi’ite futuristic thought about its role in the unfolding of the partnership between religion and politics. More pertinently, the study opens a fresh window of assessing Shi’ite political thought in the context of modern nation-state. No student of comparative politics and religious leadership can afford to ignore this stimulating contribution to the study of Shi’ism in Iran and Lebanon." - Abdulaziz Sachedina, Professor and Endowed IIIT Chair in Islamic Studies, George Mason University, USA

"Hamid Mavani examines Twelver Shi‘i views on political activity and leadership during the continued absence of the Hidden Imam from the very earliest years of the faith to the present. While he addresses the rise of wilayat al-faqih, the doctrine that underpins the Islamic Republic’s present political paradigm, he is also careful to detail alternative contemporary views on authority offered by both Arabs and Iranians, a number of whom are not as well known to western readers as they might be. Mavani’s contribution is an excellent, most welcome and very timely reminder of the complexity of past and, especially, contemporary Twelver Shi‘i discourse in general and Twelver discourse on political authority in particular." - Andrew J Newman, Reader in Islamic Studies and Persian, University of Edinburgh, UK

"Deep enough to capture the interest of well-read scholars and yet easy enough for the novice, Hamid Mavani’s writing is stellar. The introduction and first chapter, “The Ethos of Shi‘ism,” are worthy of placement on the required reading list of any college level course in Islamic studies. But Mavani goes on to explore, analyze, and interpret the ideas of the Imamate that pervade present day national and international political Islam. The doctrine of the Imamate has been and might continue to be the single most divisive doctrine in Islam. Yet, Mavani guides the reader toward an interpretation based upon very credible Shi‘ite authorities that sets the stage for a future positively influenced by this rich doctrine. Perhaps the most important chapter, “The Case for Secularity in Islam,” sets out an authentic, authoritative view of the Imamate that, if widely read, will encourage a present day relevancy of the Imamate for nations and peoples dedicated to Islam. Mavani’s view of political Islam is certainly not “static, unchanging” or “monolithic.” - Mark F. Carr, PhD, Professor of Religious Ethics, School of Religion,
Loma Linda University.

"Religious Authority and Political Thought in Twelver Shi’ism: From Ali to Post-Khomeini is a must-read for those interested in the concept of power in Shi'ism and its implications" Habil. Agata S. Nalborczyk
PhD, University of Warsaw. Journal of International and Global Studies