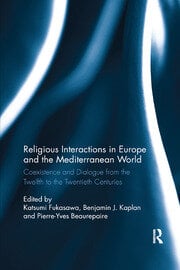 Religious Interactions in Europe and the Mediterranean World: Coexistence and Dialogue from the 12th to the 20th Centuries

The religious histories of Christian and Muslim countries in Europe and Western Asia are often treated in isolation from one another. This can lead to a limited and simplistic understanding of the international and interreligious interactions currently taking place. This edited collection brings these national and religious narratives into conversation with each other, helping readers to formulate a more sophisticated comprehension of the social and cultural factors involved in the tolerance and intolerance that has taken place in these areas, and continues today.

Part One of this volume examines the history of relations between people of different Christian confessions in western and central Europe. Part Two then looks at the relations between Western and Eastern Orthodox Christianity, Islam and Judaism in the vast area that extends around the Mediterranean from the Iberian Peninsula to western Asia. Each Part ends with a Conclusion that considers the wider implications of the preceding essays and points the way toward future research.

Bringing together scholars from Asia, the Middle East, Europe, and America this volume embodies an international collaboration of unusual range. Its comparative approach will be of interest to scholars of Religion and History, particularly those with an emphasis on interreligious relations and religious tolerance.

Part I. Christendom divided: dilemmas of coexistence, attempts at dialogue

1 Crossing confessional frontiers in the sixteenth century: Frenchmen before the Italian Inquisition

2 Between Protestants and Catholics: Proposals for the establishment of universal peace and toleration

3 Sympathy for the secret society: The Family of Love, Humanists, and Guillaume Postel.

4 God's vengeance and forgiveness for enemies: A new perspective on the Anabaptist contribution to the development of religious toleration and reconciliation in early modern Europe

7 ‘When in Rome…’: Religious practice by Anglicans on the Continent in the 17th and early 18th centuries

8 Religious printed material: actor and witness of inter-faith rivalries in south-west France in the seventeenth century

10 Protestants in the French Navy before and after the Revocation of the Edict of Nantes: Political and social questions

11 Can erudite friendship break down inter-confessional barriers and promote ecumenical dialogue? The case of the correspondence of Cardinal Querini, Bishop of Brescia, with the pastors of the French Reformed churches of Prussia in the 18th century

12 ‘In death they are not divided’: The Irish

Katsumi Fukasawa is Emeritus Professor at the University of Tokyo and Visiting Professor of European history at Kyoto-Sangyo University, both in Japan.

Pierre-Yves Beaurepaire is Professor of Early Modern History at the University of Nice Sophia Antipolis, France, and Fellow of the ‘Institut Universitaire de France’.