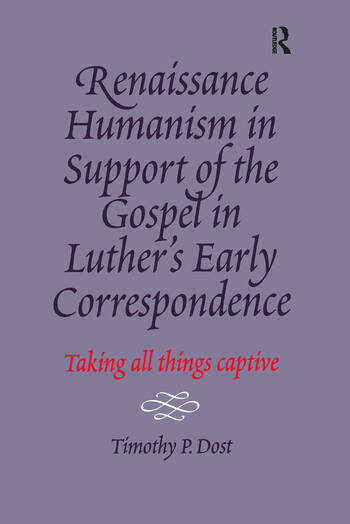 Renaissance Humanism in Support of the Gospel in Luther's Early Correspondence: Taking All Things Captive

Drawing on the early correspondence of Martin Luther, Timothy Dost presents a reassessment of the degree to which humanism influenced the thinking of this key reformation figure. Studying letters written by Luther between 1507 and 1522, he explores the various ways Luther used humanism and humanist techniques in his writings and the effect of these influences on his developing religious beliefs. The letters used in this study, many of which have never before been translated into English, focus on Luther's thoughts, attitudes and application of humanism, uncovering the extent to which he used humanist devices to develop his understanding of the gospel. Although there have been other studies of Luther and humanism, few have been grounded in such a close philological examination of Luther's writings. Combining a sound knowledge of recent historiography with a detailed familiarity with Luther's correspondence, Dost provides a sophisticated contribution to the field of reformation studies.

Contents: 1. Structure and Context: The Problem of Luther, the Correspondence, Humanism and the Gospel: Historiographic framework; Specialized Luther issues by topic; Chapter conclusions; 2. A Many-Splendored Cause: Crucial Issues in Humanism: Essential aspects from studies of Renaissance humanism ; Representative examples of scholarship in northern humanism; Useful issues for Luther studies derived from Renaissance humanism; Chapter conclusions; 3. Gaining the Credentials: Humanism and Luther’s Progress from student to Theologian: The Erfurt years: Luther and his early encounter with humanism; The early Wittenberg years: Luther and the Reuchlin controversy; Luther’s defense of his academic credentials; Chapter conclusions; 4. Fanning the flames: Humanism and Luther’s Response to the Firestorm over the Theses: Discussion of humanist influences of a general nature in the period 1517-18; Luther’s humanistic attitudes toward education; Humanist stylistic considerations; Theology grounded ad fontes: concern for learning based on proper authority; German national pride; Attitude toward and treatment of other humanists; Chapter conclusions; 5. Luther and Eck: Distrust and the Leipzig Debate: Educational issues; Stylistic changes in the letters; A strong defense; Luther, the gospel and humanism; Chapter conclusions; 6. Anticipations of Persecution and a Necessary Otium: Luther from Leipzig through Worms to the Wartburg: Quintilian, rhetoric and the vernacular; Luther and Erasmus in the period between Leipzig and the Wartburg; Luther’s distrust of Italians; Luther and Greek; Luther’s defense - continued change in tone; Luther’s fustration with and counter-attack on Eck; the gospel as priority - Luther’s exhortation to Spalatin; Chapter Conclusions; 7. General Conclusions: Taking All Things Captive: Bibliography; Index.

'... a thorough and detailed evaluation of an undoubtedly fascinating body of source material. It gives us access to an important cache of letters, many of them never before translated into English. Its unremitting concentration on a single set of sources gives a (...) sharp illumination of an otherwise familiar story. It should be read for the very particular light it casts on Luther's emerging theology...' Renaissance Studies '... in drawing a wealth of material to our attention and in his detailed and illuminating analyses of many of the letters Timothy Dost has done students of Luther and the early Reformation a great service.' Journal of Theological Studies 'In this particular collection of letters, Luther actually looks good. He is not marrying a nun or throwing an inkwell at The Devil. He is a humanist.' Bibliothèque d'Humanisme et Renaissance '... [a] stimulating examination of the still vital question of how the Reformation and Renaissance humanism stood in relation to one another...' Ecclesiastical History 'This erudite and interesting study succeeds both in filling a gap in our knowledge of Luther's early affinity with northern humanism and in driving another nail into the coffin of the old 'Luther versus humanity' canard.' Sixteenth Century Journal '... Dost has amassed an impressive amount of evidence for a distinct decline in Luther's enthusiasm for humanism, and he makes significant contributions toward explaining the importance of the movement for Luther as well as documenting Luther's own theological development.' Lutheran Quarterly