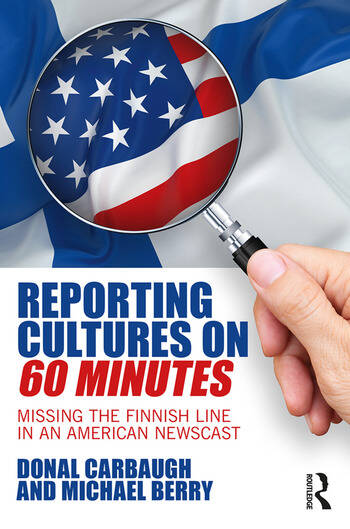 Reporting Cultures on 60 Minutes: Missing the Finnish Line in an American Newscast

This work delves into the act of reporting on different cultures as a means of exploring our own. The way culture is presented to the media highlights various international and intercultural dynamics, as well as the complexity involved in reporting from a cultural standpoint.

is a study covering the journalistic practice of reporting culture by examining "Tango Finlandia," a broadcast report on Finnish culture produced by the American television news magazine 60 Minutes. It covers the journalistic practice of reporting culture broadly by looking specifically at Finns and Americans reporting about their respective homelands and about the other’s culture and social interactions.

Scholars and students in communication, intercultural/international studies, and related areas will find much to consider in this work

Acknowledgements: Networks, the Research Team and a Plural Voice

Chapter 1-Cultural Worlds and the Illusion of a Singular Text

Chapter 3-Cultural Discourses in "Tango Finlandia": Some Initial Observations (with an American Accent)

Chapter 4-A Popular US American Discourse about Finns as Others

"...Reporting Cultures, discusses the complex interrelationships among culture, conversation, and context. Through this discussion, Carbaugh highlights the necessity of deeper intercultural awareness and understanding as a prerequisite to effective communication. Carbaugh is highly successful not only in his endeavor to highlight the impact of culture on conversation but also in his illustration of the ethnographic approach to the study of intercultural communication. For those not familiar with nonquantitative approaches to the study of culture, this text provides a good introduction to one form of ethnographic analysis. The book can serve as a good accompaniment to any research methods course in psychology. In addition to providing an example of one form of qualitative analysis, the book is a necessary inclusion for anyone conducting intercultural or international research."
—PsycCRITIQUES

"...the ease with which Carbaugh presents his arguments about culture and his conviction about his methodology leave the reader with the sense that there is intrinsic value to studying cultural moments, that more researchers should undertake this endeavor through his methodological orientation....Carbaugh does not merely translate cultural moments for his reader; instead, he guides the reader through this process and makes them a stakeholder in its outcome."

—The Review of Communication

"At a time when our contemporary world seems to be characterized and confused by reactivity, Carbaugh's book offers insight on the ways in which alternate systems of being, living, relating, and speaking take place in human interactions. Going beyond generalizations in exploring cultural communication, Carbaugh demonstrates the interdependence of culture and conversation through a rich collection of culturally situated encounters. His writing expands our imagination, stimulates our minds, and touches the hearts and souls of his readers."
—

"Reporting Cultures is another milestone in Donal Carbaugh's exploration of American culture as it manifests itself in characteristically American patterns of communication. The comparative perspective adopted in the present book leads to brilliant new insights into common American ways of speaking as well as the shared cultural assumptions and values reflected in them. Detailed studies of intercultural encounters, with careful attention to native labels for kinds of speech practices and cultural values, allow Carbaugh to identify "cultural rules for conversation" from the insider's point of view, while making them intelligible to outsiders. The book also identifies some sources of intercultural miscommunication and negative cultural stereotypes and suggests some practical remedies for them as well as providing theoretical insights. Cultures in Conversation is "ethnography of speaking" at its best. It will engage anyone interested in intercultural communication, language in society, and American culture."

"Whether it be exploring public discourse in Russia, learning to listen with the Blackfeet of Montana, or building relationships in Finland, Carbaugh writes with clarity and enthusiasm, quickly drawing the reader into the subtle workings of culture in everyday life. This book brings together some of his most intriguing work with new research and insights that give the reader a deep understanding of how communication, meaning, and identity are closely interwoven. In doing so, Carbaugh extends and elaborates on the theoretical implications of his work and an ethnographic understanding of the world. I have been reading and using Donal's work in graduate and undergraduate courses for years. The clarity with which he develops his examples and arguments makes his work ideally suited for students. I strongly recommend this book for anyone interested in understanding the relationship between culture and communication and the misunderstandings that are so apt to happen in intercultural contexts. For someone interested in understanding the ethnography of communication perspective and the insights it can provide, this is a must read."

"In Reporting Cultures Donal Carbaugh offers a compelling and nuanced analysis of the many ways in which culture shapes moments of intercultural contact. His comparative accounts of the working of cultural codes in conversation invite readers to a journey of discovery of both self and other. The book presents a rich array of case studies of face-to-face or mediated encounters in which cultural differences are puzzled over, negotiated and sometimes bridged, and thereby demonstrates how the nexus of communication and culture can be productively and systematically explored."

"Donal Carbaugh makes an outstanding contribution to the study of cultural and cross-cultural communication through his detailed analysis of communicative practices in four different cultures. Using numerous examples of naturally occurring speech, gathered from the author's many ethnographic studies, Carbaugh demonstrates how the premises which guide communication can be discovered, described, and interpreted in such a way as to reveal how people create a sense of shared cultural identity. No other author has so clearly articulated the intersection of communication and culture as has Donal Carbaugh."

"Donal Carbaugh is one of our wisest analysts of culture and communication. Here he draws on his direct experience of Russian, Finnish, and Blackfeet Indian cultures to present a comprehensive and incisive approach to understanding conversation in cultural perspective. It is a perfect text for classroom use, but even the most seasoned researchers will find enlightening insights as well as delightful and vivid examples. I'll definitely assign this book the next time I teach Cross-cultural communication."

"Donal Carbaugh's book, Reporting Cultures, is remarkable. It is based on first-hand knowledge over a number of years of a considerable range of cultures and situations. The result is an invaluable contribution to understanding of communication and the ethnography of speaking."