Resilience
The Governance of Complexity 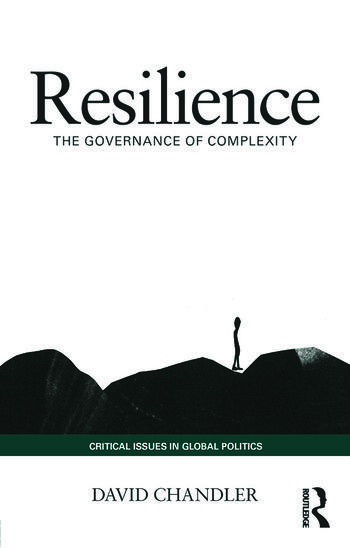 Resilience: The Governance of Complexity

Resilience has become a central concept in government policy understandings over the last decade. In our complex, global and interconnected world, resilience appears to be the policy ‘buzzword’ of choice, alleged to be the solution to a wide and ever-growing range of policy issues. This book analyses the key aspects of resilience-thinking and highlights how resilience impacts upon traditional conceptions of governance.

This concise and accessible book investigates how resilience-thinking adds new insights into how politics (both domestically and internationally) is understood to work and how problems are perceived and addressed; from educational training in schools to global ethics and from responses to shock events and natural disasters to long-term international policies to promote peace and development. This book also raises searching questions about how resilience-thinking influences the types of knowledge and understanding we value and challenges traditional conceptions of social and political processes.

1. Introduction: The Rise of Resilience, Part One: Thematics 2. Governing Complexity 3. Resilience: Putting Life to Work Part Two: Resilience and the International 4. The Politics of Limits: The Rise of Complexity in Peacebuilding, 5. The ‘Everyday’ Policy Solution: Culture, from Limit to Resource 6. A New Global Ethic: The Transformative Power of the Embedded Subject Part Three: The Politics of Resilience 7. Revealing the Public: The Reality of the Event and the Banality of Evil 8. The Democracy of Participation 9. The Poverty of Post-Humanism 10. Conclusion: Resilience, the Promise of Complexity

'David Chandler’s Resilience takes a fashionably vague catchword and subjects it to a masterful critique and reconstruction. In his words, resilience is ‘a way of thinking about how we think about the being of being.’ As such it is nothing less than an epistemic revolution in the making, a shift in what, following Foucault, it is possible to think.' -  Nicholas Onuf, Professor Emeritus, Department of Politics and International Relations, Florida International University, USA.

'Chandler (Univ. of Westminster, UK) provides the intellectual framework for his journal Resilience, which also sets out to revolutionize thinking on politics based on the concept of resilience. Chandler is among the most creative thinkers in contemporary international political thought, and this book is the culmination of his reconceptualization of international relations. Although its language and concepts are too advanced to be accessible to most undergraduate students, it is certainly a valuable source of inspiration for graduate students and researchers who seek a model for combining neo-Marxism and international relations. Summing Up: Recommended. Graduate students and research faculty.' --R.M. Paddags, Ashland University, in CHOICE, February 2015

'This book is a real contribution to knowledge and debate concerning the rise of the discourse and concept of resilience, offering a new understanding, as it does, of resilience as a response to the age of complexity.' - Julian Reid, University of Lapland

'This volume examines how ‘resilience-thinking’ has influenced how problems are perceived and addressed in a range of areas, including disaster response, peace and development, and global ethics.' - Lanxin Xiang, (2014)