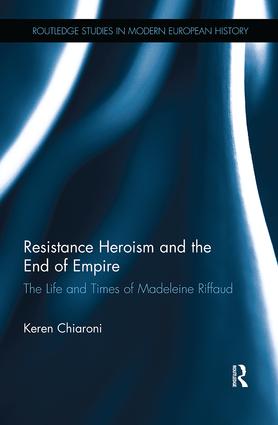 Resistance Heroism and the End of Empire

The Life and Times of Madeleine Riffaud, 1st Edition

This book introduces an English-speaking public to the life of Madeleine Riffaud – one of the last living leaders of the French Resistance. It considers the nature of the rebel hero in France’s founding historical narratives (revolution, insurrection, resistance) while asking what contributions such a hero might make to debates on national identity today.

Through a series of narrative close-ups, the book offers perspectives on major chapters in nineteenth- and twentieth-century French history through the eyes of activists who experienced them: the Revolution of July 1830 and the 1851 insurrection against Napoleon, as experienced by Riffaud’s ancestor Edme Liron, and the French Resistance, the Vietnam War and French–Algerian conflict as experienced by Riffaud herself.

The book aims to explore the kinds of choices individuals face when their beliefs set them at odds with the state, and to suggest that there is a place for individual action in a global arena where state boundaries are becoming increasingly less relevant.

"In this book I found the Madeleine I know so well: dynamic, acerbic and as rebellious as ever. Chiaroni presents an unvarnished portrait of Madeleine Riffaud. As well as being an anti colonialist, poet, résistante, and war correspondent, Riffaud is also a thoroughly contemporary rebel who could be considered exemplary by all who seek to fight against injustice and inequality - these are our real enemies in a conflicted world."

"This work has entirely achieved its objective. It offers readers a biography without descending into hagiography, and succeeds in making the links between one individual’s story and the greater story of history. It is also a pleasure to read."

Introduction: portrait of a rebel

Keren Chiaroni is Programme Director for French in the School of Languages and Cultures at Victoria University of Wellington, New Zealand. Her research interests include cultural/war history and design for performance. She is the author of The Last of the Human Freedoms (2011) and Editor for the Pacific in the World Scenography Project, vols I and II (OISTAT and York University, 2012, 2014).