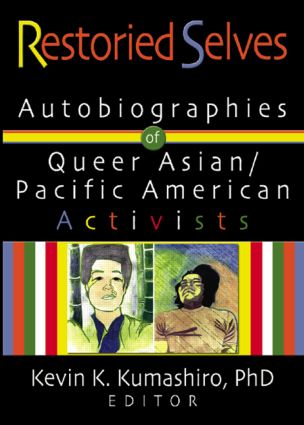 Restoried Selves: Autobiographies of Queer Asian / Pacific American Activists presents the first-person accounts of 20 activists—life stories that work against common stereotypes, shattering misconceptions and dispelling misinformation. These autobiographies challenge familial and cultural expectations and values that have traditionally forced queer Asian / Pacific Americans into silent shame because of their sexual orientation and/or ethnicity. Authors share not only their experiences growing up but also how those experiences led them to become social activists, speaking out against oppression.

Many harmful untruths—or “stories”—about queer Asian-Pacific Americans have been repeated so often, they are accepted as fact. Restoried Selves: Autobiographies of Queer Asian / Pacific American Activists provides a forum for voices often ignored in academic literature to “re-story” themselves, addressing a range of experiences that includes cultural differences and values, conflicts between different generations in a family or between different groups in a community, and difficulties and rewards of coming out. Those giving voice to their stories through narrative and other writing genres include the transgendered and intersexed, community activists, youths, and parents.