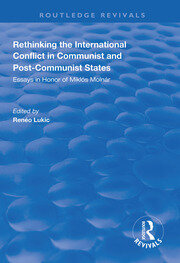 Rethinking the International Conflict in Communist and Post-communist States: Essays in Honour of Miklos Molnar

First published in 1998, the essays in this book cover a wide range of subjects related to Soviet/Russian politics and to political developments in Southeastern Europe since 1989. The first three chapters focus on Soviet/Russian foreign and domestic policy before and after the end of the Cold War. The next three chapters concentrate on the disintegration of Yugoslavia and its aftermath. The final chapter covers political developments in the Federal Republic of Yugoslavia up to the present day. The contributors to this book were all former students of Professor Miklós Molnár, and they are all now prominent researchers in the field of international relations.

1. Thinking about Russia or, What Should Have Been Done? A Tribute to the Role of Ideas and Economics in Policy Making. Andrew Williams. 2. Diplomacy of "Partnership", Russian-American Relations, 1992-1996. 3. New Evidence about the Regional Factor in Sino-Soviet Relations, 1969-1986. 4. The Origins of Croatian Statehood, October 1918. Jasna Adler. 5. The Disintegration of Yugoslavia: Reflections on its Causes in a Tentative Comparison with Austria-Hungary. Jasna Adler. 6. The US, Europe, and the Balkan Wars. Renéo Lukic. 7. The Federal Republic of Yugoslavia at the Cross-Roads? Renéo Lukic.