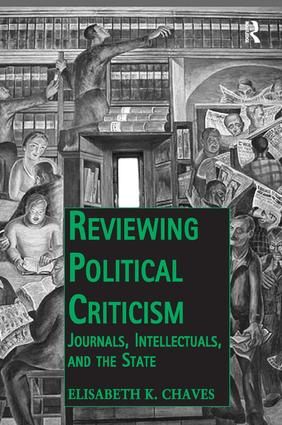 Reviewing Political Criticism examines the rise of the ’review’ form of journal publication, from the early eighteenth to the early twenty-first centuries. The review belongs to a long tradition of written political criticism that first advised, then revised, and with the increased confidence afforded to civil society by the rise of market capitalism, subsequently challenged and even transformed the state’s view on what and how it governed. Chaves investigates the crucial nexus of intellectual debate with political judgment over this time, and highlights the review’s central role in upholding this connection. Focusing upon critical moments that required the exercise of political judgment, the book explains this journal form as a means of political practice, one that essentially ’re-views’ the state’s view of how society should be ordered. To understand critical activity, one must reflect on where this activity takes place-on the institutions of criticism that sustain it. Referred to by some as the ’natural habitat’ of intellectuals, journals, as the institutionalized sites of theoretical discourse, are often overlooked. This groundbreaking book offers a concentrated critique of the review form of journal publication as a medium for political thought and action, as a decisive site for political judgment by the state’s conservers and critics.

’Elisabeth K. Chaves offers a fascinating study of what amounts to the history and future of public intellectuals who publish social criticism in reviews and journals. She considers paradigm-shifting outlets, from the New York Review of Books to Telos to, most recently, n+1 and Jacobin. She tracks the emergence of journals from pulp to pixels as she considers the impact of the Internet on intellectual life. A must-read by those interested in fostering outlets for social critics and political pundits who feel constrained by the tired tropes and tribalism of peer-reviewed academic journals.’ Ben Agger, University of Texas, Arlington, USA and author of Oversharing and Texting toward Utopia and editor of the e-journal Fast Capitalism, www.fastcapitalism.com ’A sweeping and engaging study of the practice of political criticism from the 18th century to the early 21st. Exploring how a wide range of journals confronted the challenges of politically engaged critical review, Chaves guides the reader through this complex terrain with a sharp eye.’ Emily Hauptmann, Western Michigan University, USA

Elisabeth K. Chaves is a Visiting Assistant Professor in the School of Public and International Affairs at Virginia Tech, USA.

Public Intellectuals and the Sociology of Knowledge

Public Intellectuals and the Sociology of Knowledge

The sociology of knowledge has a long and distinctive history. Its function has always been that of attempting to bridge the aspirations of the discursive and institutional founding fathers of sociology with that of modern attempts to define the discipline through the study of the emergence, role and social function of ideas. However, since Mannheim first outlined his program in the 1920s, the sociology of knowledge has undergone many changes. The field has become extremely differentiated and some of its best practitioners now sail under different flags and discuss their work under different headings. This new series charts the progress that has been made in recent times - despite the different labels. Be it intellectual history Cambridge-style, the new sociology of ideas which is now gaining strength in North America, or the more European cultural analysis which is associated with the name of Bourdieu, this series aims at being inclusive while simultaneously striving for sociological insight and excellence. All too often modern attempts in the sociology of knowledge, broadly conceived, have only looked at form while they downplayed or disregarded content, substance of argument or meaning. This series will help to rectify this.