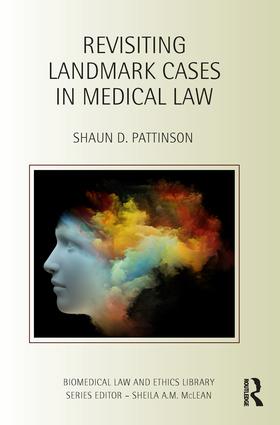 Is it lawful for a doctor to give a patient life-shortening pain relief? Can treatment be lawfully provided to a child under 16 on the basis of her consent alone? Is it lawful to remove food and water provided by tube to a patient in a vegetative state? Is a woman’s refusal of a caesarean section recommended for the benefit of the fetus legally decisive? These questions were central to the four focal cases revisited in this book.

This book revisits nine landmark cases. For each, a new leading judgment is attributed to an imagined judge, Athena, who operates within the constraints of the legal system of England and Wales. Her judgments accord with an innovative legal theory, referred to as ‘modified law as integrity’, and are linked as a line of precedent. The result is a re-spinning of extant judicial threads into a web of legal principles with a greater claim to coherence and defensibility than those in the original cases.

The book will be of great interest to scholars and students of medical law, criminal law, bioethics, legal theory and moral philosophy.

Chapter 1: The rationale and method of revisiting medical law cases

Chapter 3: Gillick: consent from a child

Chapter 5: Re MB: refusal of treatment in late pregnancy

Shaun D. Pattinson is Professor of Medical Law and Ethics and was the founding Director of Durham CELLS (Centre for Ethics and Law in the Life Sciences) at Durham University, UK. His publications include two sole authored books, Influencing Traits Before Birth (Ashgate, 2002; reissued 2017) and Medical Law and Ethics (5th edn Sweet & Maxwell, 2017), and a book co-edited with Patrick Capps, Ethical Rationalism and the Law (Hart Publishing, 2017). He is a member of the Nuffield Council on Bioethics, which is the UK’s leading bioethics committee, Fellow of both the Royal Society of Arts and Royal Society of Biology, and a Senior Fellow of the Higher Education Academy.