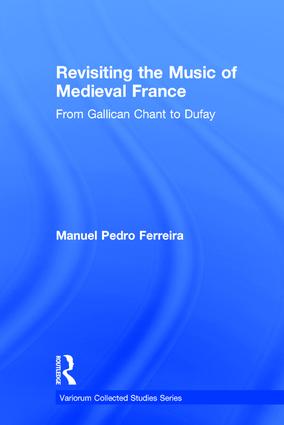 Revisiting the Music of Medieval France

This book presents together a number of path-breaking essays on different aspects of medieval music in France written by Manuel Pedro Ferreira, who is well known for his work on the medieval cantigas and Iberian liturgical sources. The first essay is a tour-de-force of detective work: an odd E-flat in two 16th-century antiphoners leads to the identification of a Gregorian responsory as a Gallican version of a seventh-century Hispanic melody. The second rediscovers a long-forgotten hypothesis concerning the microtonal character of some French 11th-century neumes. In the paper "Is it polyphony?" an even riskier hypothesis is arrived at: Do the origins of Aquitanian free organum lie on the instrumental accompaniment of newly composed devotional versus? The Cistercian attitude towards polyphonic singing, mirrored in musical sources kept in peripheral nunneries, is the subject of the following essay. The intellectual and sociological nature of the Parisian motet is the central concern of the following two essays, which, after a survey of concepts of temporality in the trouvère and polyphonic repertories, establish it as the conceptual foundation of subsequent European schools of composition. It is possible then to assess the real originality of Philippe de Vitry and his Ars nova, which is dealt with in the following chapter. A century later, the role of Guillaume Dufay in establishing a chord-based alternative to contrapuntal writing is laboriously put into evidence. Finally, an informative synthesis is offered concerning the mathematical underpinnings of musical composition in the Middle Ages.

'… this is all readable, challenging material, hard to find otherwise.' Early Music Review