Revival: The Women Bonapartes vol. II (1908)
The Mother and Three Sisters of Napoleon I 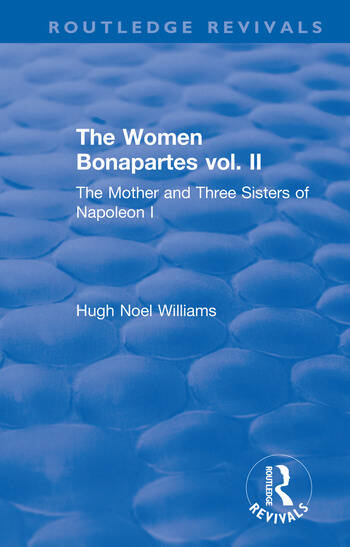 Revival: The Women Bonapartes vol. II (1908): The Mother and Three Sisters of Napoleon I

It will therefore, I think be admitted that the present volumes, in which I have endeavoured to give a full and unprejudiced history of the Women Bonapartes, call for no apology; and I may even venture to believe that, whatever their shortcomings, they will be welcomed by the English and American public as an attempt to fill a place in our Napoleonic literature which has been long vacant.

Pretensions of Letizia and her daughters

Elisa and Lucca Pauline during the winter of 1806-7

Murat, disappointed in his hopes of the Crown of Poland returns to Paris

Annexation of the kingdom of Etruria

Arrival of Murat at Naples

Mortification to which Murat is subjected by the Emperor

Madame Mere visits the King and Queen of Westphalia at Napoleonshohe

Madame decides to join the Emperor in Elba, and embarks at Leghorn on board the British corvette Grasshopper

Position of Murat and Caroline after the fall of the Empire

Italy, after the second abdication of Napoleon, becomes the refuge of the Bonapartes