Revolution and Its Past
Identities and Change in Modern Chinese History 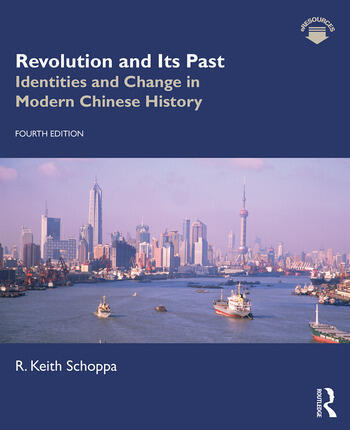 Revolution and Its Past: Identities and Change in Modern Chinese History

Revolution and Its Past is a comprehensive study of China from the last quarter of the eighteenth century through to 2018.

A fascinating and dramatic narrative, the book compels interest both as a history of an ancient civilization developing into a modern nation-state and as an account of how the Chinese as a people have struggled and continue to work to find their identity in the modern world. Beginning in the last two decades of the reign of the Qianlong emperor (1736–1795), the book provides a baseline that allows readers to understand China’s rapid decline in the nineteenth and part of the twentieth century, and extends into the present day, a time when China has the second largest economy in the world and aims to become a leading global power by 2050. The vast changes that have swept over China between these times are probed through the lens of the broad and important theme of "identities." This fourth edition has been updated throughout, providing a more thorough examination of recent history since 1960, and increasing coverage of such topics as "new Qing history," frontier and ethnicity, women and their roles, environmental concerns and issues, and globalization.

Supported by maps, images, tables, online eResources and suggestions for further reading, and written in an engaging, concise, and authoritative style, Revolution and Its Past is the ideal textbook for all students of the history of modern China.

List of Figures List of Maps Preface Notes on Pronunciation Part 1 From the Heights to the Depths: Challenges to Traditional Chinese Identities, 1780–1901 1 Identities 2 Chinese, Manchus, and Others 3 The Opium War and the Treaty System: Challenges to Chinese Identity 4 An Age of Rebellion: Defiance of and Commitments to Traditional Chinese Identities 5 Crises and Choices 6 The Devastating Nineties: Destroying Traditional Identities Part 2 "No Checking the Tides of Change": Reconstructing Social, Cultural, and Political Identity, 1901–1928 7 Revolutionaries: Manchu and Anti-Manchu 8 Selecting Identities: The Early Republic 9 Constructing a New Cultural Identity: The May Fourth Movement 10 Drawing the Sword of Opposition: Identity Increasingly Politicized Part 3 Revolution and Identity: Social Revolution and the Power of Tradition, 1928–1960 11 Revolution in Retreat: The Nanjing Decade 12 Revolution Reborn: The Communists in the 1930s 13 A Rising Clash of National Identities: China and Japan, The 1920s and 1930s 14 The Sino–Japanese War, 1937–1945 15 Toward Daybreak: Struggling for China’s Identity, 1945–1949 16 Paths to the Future 17 Coming Unglued Part 4 From "Politics in Command" to the Glory of Getting Rich: Contemporary Change and Identity, 1961–2018 18 Death Dance: The Great Proletarian Cultural Revolution 19 Reforms and Reactions, 1978–1995 20 The Economic Miracle and Its Shadows, 1992–2018 21 Whither China? 2008–2018 22 Nationalism and Globalization, 1988–2018 23 A Question of Identity: The Republic of China on Taiwan since the 1970s Pronunciation Guide Index

R. Keith Schoppa is Professor Emeritus at Loyola University Maryland in Baltimore, Maryland, USA. From 1998 to 2014, he served as the Doehler Chair in Asian History. His research focused on the political, social, and cultural history of the first half of the twentieth century. His major research works include Chinese Elites and Political Change (1982); Xiang Lake—Nine Centuries of Chinese Life (1989); Blood Road (1995), for which he won the Association for Asian Studies Levenson Award; and In a Sea of Bitterness (2011).