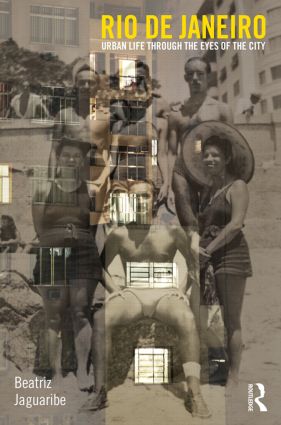 Urban Life through the Eyes of the City, 1st Edition

"Through artistic imaginaries, media productions, social practices and spatial mappings, this book offers an insightful and original contribution to the understanding of Rio de Janeiro, one of the highly contested urban terrains in the world. Offering a rich diversity of examples extracted from lived experience, iconographic materials, and narratives, it provides innovative and compelling connections between theoretical questions and urban vignettes. Throughout the essays, the specificity of Rio de Janeiro is highlighted but framed in relation to theoretical questions that are relevant to major contemporary cities. The book underlines the dilemmas of a city that attempts to compete globally while confronting social inequality, violence, and novel forms of democratic agency. It retraces Rio de Janeiro’s modernist memories as the former political/cultural capital of Brazilian intelligentsia and national culture. It explores Rio as a city of popular culture, mestizo legacies, media productions, and cultural innovation."

'This is a richly textured and fascinating examination of Rio, one of those iconic places that has functioned as a laboratory of alternative visions of what makes or breaks the good city' - John Urry, Distinguished Professor of Sociology, Lancaster University

"These beautifully written narratives of the multilayered physical and cultural histories of Rio de Janeiro brilliantly illuminate the "sedimentation of history" in one of the world’s most complex urban cultures. Beatriz Jaguaribe reveals a keen sense of the play of the visual and material city as well as that of the present and the past. The book is a tour de force of urban cultural study and a rich inquiry into the multiple imaginaries and meanings of city culture." - Thomas Bender, Professor of History, New York University

"After the vogue of urban cultural studies in recent decades, only a few texts remain standing. Beatriz Jaguaribe’s Rio de Janeiro clearly falls into this select group. She knows the impossibility of writing about the city without exhausting all modes of examination and she does this superbly well, drawing on literature, theory and history with a richness and nuance which is both inspired and penetrating." - Adrián Gorelik, urban and intellectual historian, University of Quilmes / Conicet, Argentina

"Jaguaribe (communications, Federal Univ. of Rio de Janeiro) provides equally insightful analyses whether dealing with architecture and planning, photography, carnival and other celebrations, literary models of the flaneur, or film or other visualizations. In particular, the author shows herself at home in deconstructing elite modernist visions and revisions and in guiding readers through subaltern readings that emerge from the photograph, the crowd, the beach, and the favela while engaging Brazilian and other global scholarships. Hence, Jaguaribe complicates visions of the best-known icons of this city through history, social process, aesthetics, and political economics while challenging scholars in humanities and social sciences about how they must rethink urban imaginaries. A stimulating and important book for all academic audiences. Summing Up: Highly recommended" - G. W. McDonogh, Bryn Mawr College, CHOICE Reviews, May 2015

Introduction: The Eyes of the City 1. Imagining the Marvelous City: Spectacle and urban spaces 2. Modernist Ruins: National narratives and architectural forms 3. The Visible and the Invisibles: Photography and social imaginaries in Brazil 4. Carnival Crowds 5. Tropical Babylon: Copacabana and the poetics of nostalgia and decadence 6. Favelas: Realist aesthetics, consumption and authorship 7. Narrating the Streets Afterword

Beatriz Jaguaribe is a professor at the School of Communications of the Federal University of Rio de Janeiro. She is the author of Fins de Século: Cidade e Cultura no Rio de Janeiro ( 1998) ; Mapa do Maravilhoso do Rio de Janeiro ( 2001); O choque do real: estética, mídia, cultura ( 2007), among other books. Her essays on urban culture, representations of the self and national imaginaries have been published in Public Culture, Space and Culture, Journal of Latin American Cultural Studies and several Brazilian journals. She has been awarded the RioArte Fellowship(1999); ICAS Fellowship at NYU (2000), Guggenheim ( 2004) , PLAS Fellowship at Princeton University ( 2009-2010), the Andrés Bello Chair at the King Juan Carlos of Spain Center at NYU ( 2012 ), and the CNPq award ( 2012-2015). She has been a visiting professor at Stanford University, Dartmouth College, The New School of Social Research, Princeton University and New York University.