Robert Burns and the Philosophers 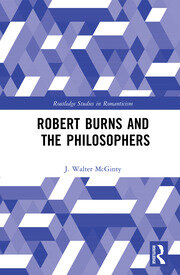 Robert Burns and the Philosophers

on his life and work, supplementing this with his personal encounters

with those philosophers he met. The work begins with the

Homespun Philosophy of his early years under the tutelage of William

Burnes and John Murdoch, then examines in detail some of the texts of

John Locke, Adam Smith and Francis Hutcheson, including other writers

who reflect Hutcheson’s thinking. Further chapters include the exploration

Greenfield. Robert Burns and the Philosophers does not purport to be a

and the development of his understanding. This work opens up a subject

that hitherto has been almost unexplored.

received his PhD at the University of Strathclyde on

Dr McGinty is an ordained Minister, having trained for the Ministry of

Glasgow. Other publications are Robert Burns and Religion, (Ashgate);

and Robert Burns the Book Lover: From Reader to Writer, (Humming

Earth.) The present volume completes the trilogy of books that have

examined the influence of the reading of Robert Burns. McGinty has

also written a biography, ‘An Animated Son of Liberty’: A Life of John

Witherspoon, (Arena) and has published papers on ‘John Goldie and