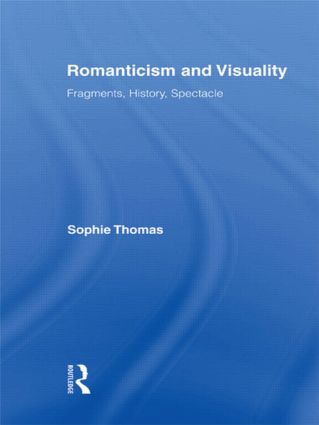 This book investigates the productive crosscurrents between visual culture and literary texts in the Romantic period, focusing on the construction and manipulation of the visual, the impact of new visual media on the literary and historical imagination, and on fragments and ruins as occupying the shifting border between the visible and the invisible. It examines a broad selection of instances that reflect debates over how seeing should itself be viewed: instances, from Daguerre's Diorama, to the staging of Coleridge's play Remorse, to the figure of the Medusa in Shelley's poetry and at the Phantasmagoria, in which the very act of seeing is represented or dramatized. In reconsidering literary engagements with the expanding visual field, this study argues that the popular culture of Regency Britain reflected not just emergent and highly capitalized forms of mass entertainment, but also a lively interest in the aesthetic and conceptual dimensions of looking. What is commonly thought to be the Romantic resistance to the visible gives way to a generative fascination with the visual and its imaginative--even spectacular--possibilities.

"Exploring the inter-relationship between literature and visual culture in the Romantic period, Thomas (humanities, U. of Sussex) looks at how seeing itself was viewed, both by people involved in creating visual spectacle and those who responded by writing in literature about the status of the visual. Her topics include the fragment in ruins, Romantic idealism and the interference of sight, and vision and revulsion in Shelley. Some of the chapters have been published as independent essays." -- Book News Inc., August 2008

Picturesque to the Panorama

and the Gothic Subject

and the Play of Semblance