Routeing Democracy in the Himalayas
Experiments and Experiences 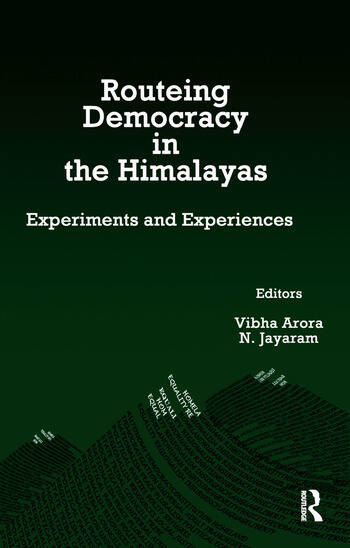 Routeing Democracy in the Himalayas: Experiments and Experiences

Historically treated as an amorphous borderland and marginal to the understanding of democratic politics and governance in South Asia, Southeast Asia and northern Asia, the Himalayan region, in the last 50 years, has become an ‘active political laboratory’ for experiments in democratic structures and institutions. In turn, it has witnessed the evolution of myriad political ideologies, movements and administrative strategies to accommodate and pacify heterogeneous ethnic-national identities.

in the Himalayas highlights how, through an ongoing process of democratisation, the Western liberal ideologies of democracy and decentralisation have interacted with varied indigenous politico-cultural ideas and institutions of an ethnic-nationally diverse population. It also reviews how formal democracy, regular elections, local self-governing structures, protection of the rights of minorities and indigenes, freedom of expression, development of mass media and formation of ethnic homelands — all have furthered participatory democracy, empowered the traditionally marginalised groups and ensured sustainable development to varying degrees. The book provides ethnographic and historical vistas of democracy under formation, at work, being contested and even being undermined, showing how democratisation thematically stitches the independent Himalayan nations and the Indian Himalayan states into a distinctive regional political mosaic.

List of Tables. List of Plates and Map. Preface. Introduction: Democracy in the Himalayan Region Vibha Arora and N. Jayaram Part I. Identity Politics and Democratic Transition 1. The Adivasi/Janajati Movement in Nepal: Myths and Realities of Indigeneity Gerard Toffin 2. The Power of Script: Phālgunanda’s Role in the Formation of Kiranti Ethnicity Martin Gaenszle 3. Refiguring Rights, Redefining Culture: Hill Council in Kargil, Jammu and Kashmir Mona Bhan Part II. Development of Democratic Routes 4. The Paradox of Democracy in the Northeast and the Eastern Himalayas Vibha Arora 5. Deep Democracy or Ethnocentrism? Locating Voice in the Protests against Development in Northeastern India Duncan McDuie-Ra 6. Democracy through the Gun? Challenges of Post-conflict Reconstruction in Conflict-torn Assam Nel Vandekerckhove 7. Democratic Transition in Jammu and Kashmir: Lessons from Nature Conservation Interventions Saloni Gupta 8. Tibetan Democracy-in-Exile: The ‘Uniqueness’ and Limitations of Democratic Procedures in a Territory-less Polity Fiona McConnell 9. The Ebb and Flow of Nepalese Democracy Renske Doorenspleet and Bal Gopal Shrestha 10. The Changing Discourse of Social Justice in Nepal Poshendra Satyal Pravat. About the Editors. Notes on Contributors. Index

Vibha Arora is Assistant Professor of Sociology and Social Anthropology at the Indian Institute of Technology Delhi (IIT Delhi).

is Professor of Research Methodology at the Tata Institute of Social Sciences (TISS), Mumbai.