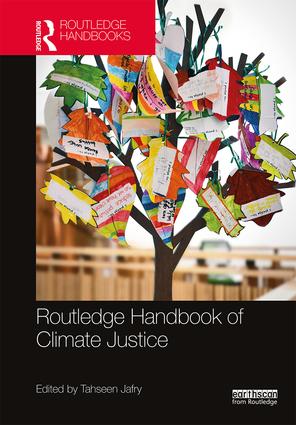 The term "climate justice" began to gain traction in the late 1990s following a wide range of activities by social and environmental justice movements that emerged in response to the operations of the fossil fuel industry and, later, to what their members saw as the failed global climate governance model that became so transparent at COP15 in Copenhagen. The term continues to gain momentum in discussions around sustainable development, climate change, mitigation and adaptation, and has been slowly making its way into the world of international and national policy. However, the connections between these remain unestablished.

Addressing the need for a comprehensive and integrated reference compendium, The Routledge Handbook of Climate Justice provides students, academics and professionals with a valuable insight into this fast-growing field. Drawing together a multidisciplinary range of authors from the Global North and South, this Handbook addresses some of the most salient topics in current climate justice research, including just transition, urban climate justice and public engagement, in addition to the field’s more traditional focus on gender, international governance and climate ethics. With an emphasis on facilitating learning based on cutting-edge specialised climate justice research and application, each chapter draws from the most recent sources, real-world best practices and tutored reflections on the strategic dimensions of climate justice and its related disciplines.

The Routledge Handbook of Climate Justice will be essential reading for students and scholars, as well as being a vital reference tool for those practically engaged in the field.

"This Handbook is a timely and significant contribution to the growing body of academic literature on climate justice. It comes at a critical turning point in UNFCCC climate negotiations with the imminent review of the Paris Agreement. It is an excellent knowledge resource bound to be of particular interest to academics, practitioners and students engaged in the field of climate change and climate justice." -- Mary Robinson, President, Mary Robinson Foundation – Climate Justice

"Climate justice names the central problem - and solution - for this century and beyond. In this collection, you will learn why this is and, in these still-early stages of thinking and CJ movement-building, which debates are raging." -- Patrick Bond, Distinguished Professor of Political Economy, University of the Witwatersrand, Johannesburg, South Africa

1. Introduction: Justice in the Era of Climate Change

Part I Theories of Climate Justice

2. On the evolution and continuing development of the climate justice movement

3. On inquiry into climate justice

6. Global political processes and the Paris Agreement: A case of advancement or retreat of climate justice?

7. Statehood in an Era of Sinking Islands

9. Climate Justice in the UK: Reconciling climate change and equity issues in policy and practice in a developed country context

10. Equity and justice in climate change law and policy: A role for benefit-sharing

11. Leading from the Bench: The role of judges in advancing climate justice, and lessons from South Asia

13. The inter-relationship between climate finance and climate justice in the UNFCCC

15. Sharing the burden of climate change via climate finance and business models

16. From the dirty past to the clean future: Addressing historic energy injustices with a just transition to a low-carbon future

19. Big Oil's duty of disgorging funds in the context of climate change

20. Climate Justice and REDD+: A multiscalar examination of the Norwegian-Ethiopian Partnership

23. The shifting geographies of climate change justice: Mobile vulnerabilities in and across Indian cities

24. Fair for whom? How residents and municipalities evaluate sea-level rise policies in Botany Bay, Australia

25. Thermal inequity: The relationship between urban structure and social disparities in an era of climate change

27. "No climate justice without gender justice": explorations of the intersections between gender and climate injustices in climate adaptation actions in the Philippines

30. "Climate change is about us": The NAACP, fence-line communities, and the grounding of climate justice

32. Negotiating climate Justice at the subnational scale: Challenges and collaborations between indigenous peoples and governments

33. Understanding the crises, uncovering the root causes, and envisioning the world(s) we want: Conversations with the anti-pipeline movements in Canada

34. Beyond the academy: Reflecting on public engagement about climate justice

35. Climate migration: The emerging need for a human centred approach

Tahseen Jafry is a Professor at Glasgow Caledonian University (GCU), Scotland, UK and the Director of GCU’s Centre for Climate Justice.