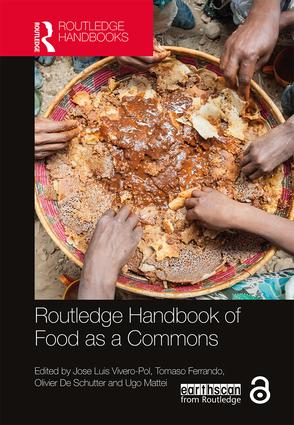 Routledge Handbook of Food as a Commons

This Handbook provides the first comprehensive review and synthesis of knowledge and new thinking on how food and food systems can be thought, interpreted and practiced around the old/new paradigms of commons and commoning. The overall aim is to investigate the multiple constraints that occur within and sustain the dominant food and nutrition regime and to explore how it can change when different elements of the current food systems are explored and re-imagined from a commons perspective.

The book sparks the debate on food as a commons between and within disciplines, with particular attention to spaces of resistance (food sovereignty, de-growth, open knowledge, transition town, occupations, bottom-up social innovations) and organizational scales (local food, national policies, South–South collaborations, international governance and multi-national agreements). Overall, it shows the consequences of a shift to the alternative paradigm of food as a commons in terms of food, the planet and living beings.

Chapter 1 of this book is freely available as a downloadable Open Access PDF under a Creative Commons Attribution-Non Commercial-No Derivatives 3.0 license. https://s3-us-west-2.amazonaws.com/tandfbis/rt-files/docs/Open+Access+Chapters/9781351665520_oachapter1.pdf

Chapter 24 of this book is freely available as a downloadable Open Access PDF under a Creative Commons Attribution-Non Commercial-No Derivatives 3.0 license. https://s3-us-west-2.amazonaws.com/tandfbis/rt-files/docs/Open+Access+Chapters/9781351665520_oachapter24.pdf

"If you want to understand why the commons isn't tragic, what gastronomy has to do with a democracy or what the practice and theory of a future food system might look like, this wonderful collection of essays is well worth reading." — Raj Patel, food scholar, communicator and author of Stuffed and Starved, 2013 and A History of the World in Seven Cheap Things, 2018

"The adoption of a holistic and complex vision of gastronomy is the only way to restore the true value of food. It is not only about production and consumption, but also wisdom, memory, knowledge and spirituality, traditional practices and modern technologies combined in an ecological interconnection between people and the planet. This book starts a needed and welcome reflection on the change in paradigm, and traces a possible pathway towards food sovereignty." — Carlo Petrini, founder and president of the international Slow Food movement and the University of Gastronomic Sciences, Italy

"If we are really to transform the food system, we need bold ideas. Food as commons is one of them. If you are serious about exploring new ways of fixing the food system, read this book." — Professor Corinna Hawkes, Director, Centre for Food Policy, City, University of London, UK and Co-Chair of the Independent Expert Group of the Global Nutrition Report

"Finally, a rich and rigorous assessment of food as a commons! This landmark collection of essays reveals how much we need to rethink the very language and frameworks by which we understand food and agriculture. The food we eat is not a mere commodity, it is the cherished, complicated outcome of culture, history, vernacular practice, ecological relationships, and identity. Insights on these themes can help us build new food systems that are stable, fair, and enlivening." — David Bollier, scholar and activist on the commons, author of Think Like a Commoner, 2014 and co-editor of The Wealth of the Commons, 2012

1. Introduction: the food commons are coming

PART I: REBRANDING FOOD AND ALTERNATIVE NARRATIVES OF TRANSITION

2. The idea of food as a commons: multiple understandings for multiple dimensions of food

3. The food system as a commons

5. New roles for citizens, markets and the state towards an open-source agricultural revolution

11. Traditional agricultural knowledge as a commons

12. Scientific knowledge of food and agriculture in public institutions: movement from public to private goods

14. Genetic resources for food and agriculture as commons

16. The ‘campesino a campesino’ agroecology movement in Cuba: food sovereignty and food as a commons

17. The commoning of food governance in Canada: pathways towards a national food policy?

18. Food surplus as charitable provision: obstacles to re-introducing food as a commons

19. Community-building through food self-provisioning in Central and Eastern Europe: an analysis through the food commons framework

20. Can food as a commons advance food sovereignty?

21. Land as a commons: examples from United Kingdom and Italy

24. Food as commons: towards a new relationship between the public, the civic and the private

Jose Luis Vivero-Pol is a Research Fellow on food governance and agri-food transitions at the Centre for the Philosophy of Law and the Earth and Life Institute, Catholic University of Louvain, Belgium. An agronomist and development worker with 20 years of experience in food security and nutritional policies, right to food, food sovereignty movements and biodiversity conservation schemes, mostly working in the Global South (Latin America, Africa and Asia). At present, he is working with the United Nations World Food Programme in Asia.

Tomaso Ferrando is Lecturer in Law at the University of Bristol Law School, UK. He has been Visiting Professor at the Universita' di Torino, Italy, and Universidad Externado de Colombia, Colombia, and Resident Fellow at the Institute for Global Law and Policy at Harvard Law School, USA. He is an active member of the Legal Action Committee of the Global Legal Action Network and the Extraterritorial Obligation Consortium.

Olivier De Schutter is Professor at the Catholic University of Louvain, Belgium, SciencesPo Paris, France, and the College of Europe, Natolin, Poland. He has been Visiting Professor at Yale, UCLA and Columbia universities in the USA. He is a member of the Committee on Economic, Social and Cultural Rights of the United Nations and Co-Chair of IPES-Food, the International Panel of Experts on Sustainable Food Systems. Formerly, he was UN Special Rapporteur on the right to food and the Chair of the EU Network of Independent Experts on Fundamental Rights.