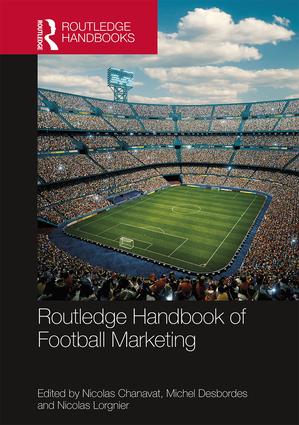 Football is big business. The top teams and leagues in world football generate billions of dollars in revenue and serve an audience of billions of fans. This book focuses on the marketing of football as the apex of the contemporary football industry. Drawing upon key theories and concepts in sport marketing, it highlights the critical strategic and operational elements that underpin effective marketing in football clubs around the world.

From the English Premier League to Major League Soccer, this handbook addresses the most important developments in sponsorship, marketing communications, digital marketing strategies, customer relationship management and social media. Written by a team of leading football marketing experts, it presents the latest cutting-edge research in case studies from countries including the UK, USA, France, Spain, Germany, Italy, China and Japan.

The only up-to-date book on football marketing written from a truly international perspective, the Routledge Handbook of Football Marketing is an invaluable resource for any researcher or advanced student with an interest in football marketing, as well as all marketers working in the professional football business.

1. The Marketing of Football: History, definitions, singularities, strategies and forms of operationalization

2. The Economic Model of a Professional Football Club in France

3. The Marketing of Professional Soccer in the United States: A case study of Major League Soccer

4. Fifteen Years of Sport Marketing Revisited: An interview of the "great witness" Christophe Bouchet, former president of Olympic Marseille, former CEO of Sportfive and Director of Infront in France

Section II: Topics Related to the Marketing of Professional Clubs

7. The Other Field of Play: Football on social media

8. Regions and Professional Football Clubs: What is cohabitation between the sports brand and the regional brand?

10. Towards a Globalization of the Brand Paris Saint-Germain

11. The Parc Multifonctionnel Olympique Lyonnais and the "Grand Stade": At the heart of the OL Groupe’s marketing strategy

12. "Green Fandom": At the heart of the marketing plan of the Association Sportive de Saint-Étienne

13. "I can’t help falling in love with my team": Active engagement in social initiatives as a driver of fan commitment in sports

16. The ACF Fiorentina Marketing: The strength of local identity

[James A. Kenyon and Guillaume Bodet]

18. Manchester United: The capitalized history, from the 1960s to today

Nicolas Chanavat is Director of the first year of the sport management Master’s degree programme at the University of Paris-Saclay, France, and Director of Research Grants for the French Centre for Olympic Studies. He is a specialist in football marketing and mega sporting events and has published several books and academic articles in these areas. Mr Chanavat has worked for professional sport clubs such as AS Saint-Étienne and organised several mega sporting events (FIFA, IOC, UEFA). In addition, he works as a consultant for the French Soccer Federation and the "Grand Stade" of the Olympique Lyonnais.

Michel Desbordes is Sports Marketing Professor at the University of Paris-Sud, France and Chief Editor of the International Journal of Sports Marketing and Sponsorship. As a Media Consultant, he is regularly consulted by BFM, France Télévisions, Europe 1, Le Monde and L’Équipe to discuss matters of sports business. He has also been Associate Professor at the University of Ottawa, Canada, and the Shanghai University of Sports, China. Michel has published 30 reference books in the field of sports marketing, as well as numerous academic articles.

Nicolas Lorgnier is an associate professor at Canisius College, USA. He has over 10 years of teaching experience in sport management and has worked with universities in Europe, North America and Asia. Mr Lorgnier has written over 30 publications, including articles in leading sport management and service management journals such as European Sport Management Quarterly and Service Business. He also serves as a reviewer for various academic journals, such as the Journal of Sport Management, the International Journal of Sports Marketing and Sponsorship and the Journal of Strategic Marketing.