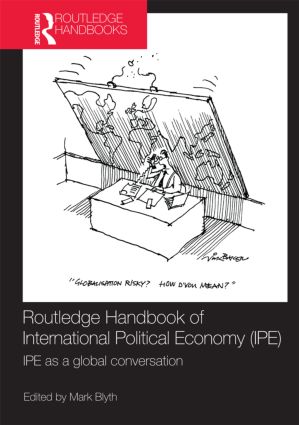 The study of the International Political Economy (IPE), like the IPE itself, is plural and unbounded. Despite what partisans sometimes say, rather than there being ‘one way’ of studying the IPE that is the ‘right way’, we find across the world great variation in IPE scholarship in terms of focus, questions, and methods. How then can we make sense of this and understand the field as a whole rather than simply learn one part of it?

This Handbook is designed to address precisely this concern. It maps the shifting boundaries and diverse theoretical commitments of IPE around the world. It engages the geographical and theoretical diversity of the different versions of IPE found in North America, the UK, in Asia and Australia; and notes the absences of distinctive versions of IPE in Europe and Latin America. The volume groups together the essential attributes and positions of each school, inviting the reader to engage with and learn about IPE in all of its guises through this evolving ‘global conversation.’ Rather than adjudicate ‘the one true version’ of IPE, it argues that the intellectual diversity we see around the world is an essential, and positive, feature of the field.

With over twenty contributors from a wide range of countries Routledge Handbook of International Political Economy is an essential resource for all those with an interest in this complex and rapidly evolving field of study.

'This Handbook is very ambitious in its scope, and succeeds admirably in carrying it off … very well-structured and presented.' - ASEAN Economic Bulletin, Vol.26, No.3, December 2009

'This highly literate, meticulously edited work performs the useful function of providing a geography and history of thought for the field. It focuses especially on English-speaking developed countries, includes several articles on IPE and Asia, and touches on Latin America and France. Summing up: Highly Recommended' CHOICE

Mark Blyth is Professor of International Political Economy at Brown University. His research interests lie in the fields of international and comparative political economy. His articles have appeared in The American Political Science Review, International Studies Quarterly, and World Politics.