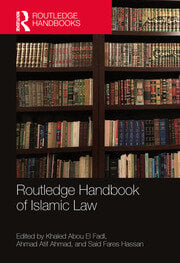 This handbook is a detailed reference source comprising original articles covering the origins, history, theory and practice of Islamic law. The handbook starts out by dealing with the question of what type of law is Islamic law and includes a critical analysis of the pedagogical approaches to studying and analysing Islamic law as a discipline. The handbook covers a broad range of issues, including the role of ethics in Islamic jurisprudence, the mechanics and processes of interpretation, the purposes and objectives of Islamic law, constitutional law and secularism, gender, bioethics, Muslim minorities in the West, jihad and terrorism.

Previous publications on this topic have approached Islamic law from a variety of disciplinary and pedagogical perspectives. One of the original features of this handbook is that it treats Islamic law as a legal discipline by taking into account the historical functions and processes of legal cultures and the patterns of legal thought.

With contributions from a selection of highly regarded and leading scholars in this field, the Routledge Handbook of Islamic Law is an essential resource for students and scholars who are interested in the field of Islamic Law.

I. Approaches and the State of the Field, Ahmad Atif Ahmad, Editor

Part One: Jurisprudence and Ethics

, Natural Law and the Original State

and Muslim Minorities in the West

Khaled Abou El Fadl is the Omar and Azmeralda Alfi Distinguished Professor of Law at the UCLA School of Law. He is the author of numerous books and articles on Islam and Shari‘ah, Islamic law and Islamic jurisprudence. Among his books are: Reasoning with God: Reclaiming Shari‘ah in the Modern Age (Rowman and Littlefield, 2014); The Search for Beauty in Islam: A Conference of the Books (Rowman and Littlefield, 2006); Speaking in God’s Name: Islamic law, Authority and Women (Oneworld Publications, 2001); And God Knows the Soldiers: The Authoritative and Authoritarian in Islamic Discourses (Rowman and Littlefield/UPA, 2001); The Great Theft: Wrestling Islam from the Extremists (HarperOne, 2007) and Rebellion and Violence in Islamic Law (Cambridge University Press, 2001).

Ahmad Atif Ahmad is professor of religious studies at the University of California in Santa Barbara (UCSB). He is the author of Islamic Law: Cases, Authorities, and Worldview (London: Bloomsbury, 2017), The Fatigue of the Sharia (New York: Palgrave, 2012), and Structural Interrelations of Theory and Practice in Islamic Law (Leiden: Brill, 2006), Professor Ahmad teaches courses on Islamic legal reasoning in medieval Islam and early modern Egypt.

currently teaches at al-Azhar University, Faculty of Languages and Translation, Department of Islamic Studies, Cairo, Egypt. He received his PhD from UCLA in 2011. He worked as a visiting assistant professor at Georgetown University in 2012; a visiting fellow at the Institute for Islamic Studies (IAIN) Sultan Maulana Hasanuddin, Indonesia in 2014; and a visiting fellow at the Berlin Graduate School Muslim Cultures and Societies, Freie Universität, Berlin also in 2014. His publications include Fiqh al-Aqalliyyat: History, Development and Progress (New York: Palgrave Macmillan 2013) and ‘Law-Abiding Citizen: Recent Fatwas on Muslim Minorities’ Loyalty to Western Nations’, Journal of the Muslim World, October 2015. He has contributed a number of chapters to edited volumes such as Education and the Arab Spring: Shifting Toward Democracy, 2016, Christian–Muslim Relations. A Bibliographical History, 2016, and The Encyclopedia of Muslim American History, 2010.