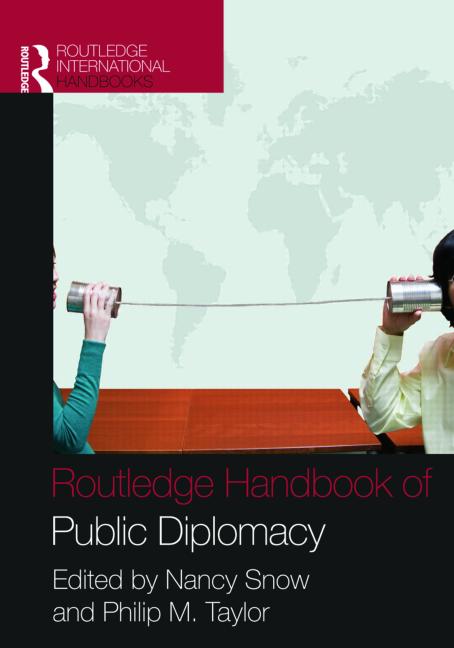 The Routledge Handbook of Public Diplomacy provides a comprehensive overview of public diplomacy and national image and perception management, from the efforts to foster pro-West sentiment during the Cold War to the post-9/11 campaign to "win the hearts and minds" of the Muslim world. Editors Nancy Snow and Philip Taylor present materials on public diplomacy trends in public opinion and cultural diplomacy as well as topical policy issues. The latest research in public relations, credibility, soft power, advertising, and marketing is included and institutional processes and players are identified and analyzed. While the field is dominated by American and British research and developments, the book also includes international research and comparative perspectives from other countries.

Published in association with the USC Center on Public Diplomacy at the Annenberg School based at the University of Southern California.

Nancy Snow is Professor of Communications at California State University, Fullerton. She is adjunct professor of public diplomacy at the University of Southern California and the Interdisciplinary Center Herzliya.

Philip M. Taylor, now deceased, was Professor of International Communications at the University of Leeds and acknowledged as one of the foremost authorities in propaganda history and public diplomacy.

"Snow, Taylor and a distinguished group of scholars have produced the definitive sourcebook on one of the most important subjects of our time. This collection offers a highly readable and comprehensive look at how the U.S. has veered off course in the battle for the hearts and minds of much of the world. This is a must read for students and scholars, and should be placed in the hands of the policymakers who inherit the challenge of restoring the public image and credibility of this wayward superpower."

"Since 9/11 public diplomacy has emerged as a critical, but little understood, component of foreign policy. This Handbook explains what it is, what it isn’t, who does it well, and who doesn’t. In short, it is essential to understanding how countries present themselves to the world."

"Snow and Taylor's Routledge Handbook of Public Diplomacy offers valuable and timely advice about China as it struggles to tell its story of Tibet and the 2008 Beijing Olympics. The editors take a global perspective to address the public diplomacy issue in a well-admired effort to build a global dialogue between the East and the West."

"A nation's success in global politics of the 21st century will depend in large part on the management of national image and reputation. Soft power has become a necessary rather than optional complement to hard power. With its breadth and depth of analysis, the Routledge Handbook of Public Diplomacy is required reading for those who care about how countries can use the tools of communication to create a competitive advantage in the Information Age."