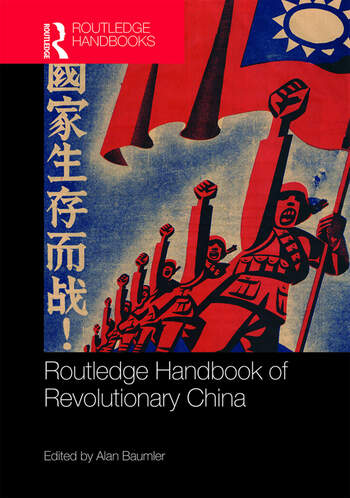 The Routledge Handbook of Revolutionary China covers the evolution of Chinese society from the roots of the Republic of China in the early 1900s until the end of the Cultural Revolution in 1976.

The chapters in this volume explain aspects of the process of revolution and how people adapted to the demands of the revolutionary situation. Exploring changes in political leadership, as well as transformation in culture, it compares the differences in experiences in urban and rural areas and contrasts rapid changes, such as the war with Japan and Communist ‘liberation’ with evolutionary developments, such as the gradual redefinition of public space. Taking a comprehensive approach, the themes covered include:

This is an essential resource for students and scholars of Modern China, Republican China, Revolutionary China and Chinese Politics.

1 Japanese goals, Chinese realities at the grassroots: the Japanese Occupation in northern Zhejiang, 1937–42

2 The rise of the Chinese Communist military-fiscal party-state in Shandong Province, 1937–45

4 Liberation: a view from the Southwest

5 The search for a Socialist everyday: the urban communes

7 "There is no crisis and it is going to go away soon, anyhow"—propaganda, denialism and revisionism in debating the Great Leap Forward famine

8 Gospel light or imperialist poison? Controversies of the Christian community in China, 1922–55

12 Learning the new culture: rural literacy education in Shanxi in the 1930s and 1940s

17 Ambiguous paradigms: the Russian model and the Chinese Revolution

18 All rivers flow into the sea: the making of China’s most cosmopolitan city

20 The nationalization of the hardship of travel in China, 1895–1949: progress, hygiene and national concern

21 Chinese revolutions and the ebb and flow of revolutionary historiography

Alan Baumler is Professor of History and Asian Studies Coordinator at Indiana University of Pennsylvania, USA. He is the author of Worse Than Floods and Wild Beasts: The Chinese and Opium Under the Republic and co-editor of The Chinese Historical Review.