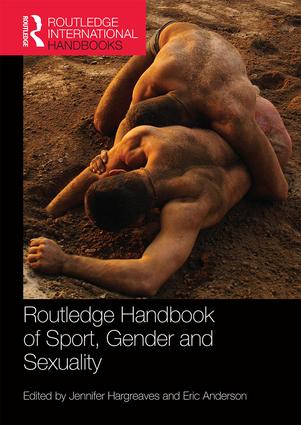 The Routledge Handbook of Sport, Gender and Sexuality brings together important new work from 68 leading international scholars that, collectively, demonstrates the intrinsic interconnectedness of sport, gender and sexuality. It introduces what is, in essence, a sophisticated sub-area of sport sociology, covering the field comprehensively, as well as signalling ideas for future research and analysis. Wide-ranging across different historical periods, different sports, and different local and global contexts, the book incorporates personal, ideological and political narratives; varied conceptual, methodological and theoretical approaches; and examples of complexities and nuanced ways of understanding the gendered and sexualized dynamics of sport. It examines structural and cultural forms of gender segregation, homophobia, heteronormativity and transphobia, as well as the ideological struggles and changes that have led to nuanced ways of thinking about the sport, gender and sexuality nexus. This is a landmark work of reference that will be a key resource for students and researchers working in sport studies, gender studies, sexuality studies or sociology.

"The most wide-ranging volume ever published on the broad topic of gender and sexuality within sport. Summing Up: Recommended." -S. K. Fields, University of Colorado-Denver, CHOICE Review, December 2014

"…both fascinating and leading edge…The Routledge Handbook of Sport, Gender and Sexuality highlights how much more there is to know. It also demonstrates how many ongoing and emerging issues there are to consider, accomodate and./or address. I highly recommend this text for those interested in this field and how sport, gender and sexuality intertwine." - Elizabeth Bennet, Exercise & Sports Science Australia (ESSA)

"This Handbook presents a vital contribution to the academic conversations surrounding gender and sexuality and should be seen as a foundational read for any student or academic concerned with this terrain." - Benjamin Moreland, University of Gloucestershire, idrottsforum.org

Jennifer Hargreaves is retired from full-time university work and is now a freelance writer/consultant. She was an early pioneer of sport sociology specializing in gender issues, the role of women in sport and the politics of the body. Jennifer has published prolifically, with translations into several different languages; has given addresses all over the world; and has worked as a guest professor in Germany, Hong Kong and Japan.

Eric Anderson is a sociologist and a Professor of Sport, Masculinities and Sexualities at the University of Winchester, UK. His research shows an increasingly positive relationship between gay athletes and sport, as well as a growing movement of heterosexual masculinities becoming softer and more inclusive. Professor Anderson has published twelve books, including Sport, Theory and Social Problems, Inclusive Masculinity and Sport, Masculinities and Sexualities, all with Routledge.