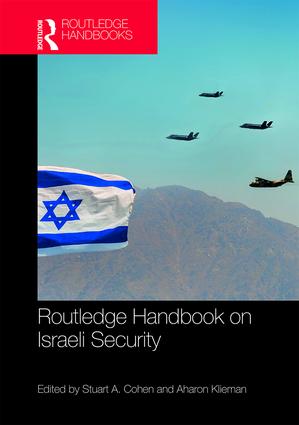 The Routledge Handbook on Israeli Security provides an authoritative survey of both the historical roots of Israel’s national security concerns and their principal contemporary expressions. Following an introduction setting out its central themes, the Handbook comprises 27 independent chapters, all written by experts in their fields, several of whom possess first-hand diplomatic and/or military experience at senior levels. An especially noteworthy feature of this volume is the space allotted to analyses of the impact of security challenges not just on Israel’s diplomatic and military postures (nuclear as well as conventional) but also on its cultural life and societal behavior.

This comprehensive and up-to-date collection of studies provides an authoritative and interdisciplinary guide to both the dynamism of Israel’s security dilemmas and to their multiple impacts on Israeli society. In addition to its insights and appeal for all people and countries forced to address the security issue in today’s world, this Handbook is a valuable resource for upper-level undergraduates and researchers with an interest in the Middle East and Israeli politics, international relations and security studies.

" It is undoubtedly an important, impressive, and useful handbook that deserves a place in the library of anyone seeking a deeper understanding of Israel’s national security challenges. "

Stuart A. Cohen is a graduate of Oxford University and Professor Emeritus of Political Studies at Bar-Ilan University, Israel. His current research focuses on military–societal relations in Israel. His most recent book is Divine Service? Judaism and Israel's Armed Forces (2016).

Aharon Klieman is a graduate of Johns Hopkins University’s School of Advanced International Studies. He has been a member of Tel-Aviv University’s Department of Political Science since 1969 and is currently Professor Emeritus. He is the editor of Great Powers and Geopolitics: International Affairs in a Rebalancing World (2015).