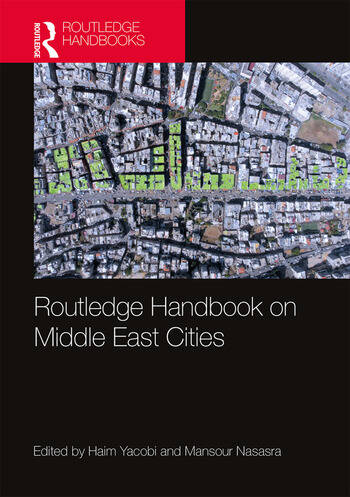 Presenting the current debate about cities in the Middle East from Sana’a, Beirut and Jerusalem to Cairo, Marrakesh and Gaza, the book explores urban planning and policy, migration, gender and identity as well as politics and economics of urban settings in the region.

This handbook moves beyond essentialist and reductive analyses of identity, urban politics, planning, and development in cities in the Middle East, and instead offers critical engagement with both historical and contemporary urban processes in the region. Approaching "Cities" as multi-dimensional sites, products of political processes, knowledge production and exchange, and local and global visions as well as spatial artefacts. Importantly, in the different case studies and theoretical approaches, there is no attempt to idealise urban politics, planning, and everyday life in the Middle East –– which (as with many other cities elsewhere) are also situations of contestation and violence –– but rather to highlight how cities in the region, and especially those which are understudied, revolve around issues of housing, infrastructure, participation and identity, amongst other concerns.

Analysing a variety of cities in the Middle East, the book is a significant contribution to Middle East Studies. It is an essential resource for students and academics interested in Geography, Regional and Urban Studies of the Middle East.

Haim Yacobi is a Professor of Development Planning at the Bartlett Development Planning Unit, University College London. In 1999 he formulated the idea of establishing "Bimkom – Planners for Planning Rights" and co-founded this NGO that deals with human rights and planning in Israel\Palestine. His research interest in relation to urban space are social justice, urban health, migration, and colonial planning. His latest books are Rethinking Israeli Space: Periphery and Identity (2011 with Erez Tzfadia) and Israel and Africa: A Genealogy of Moral Geography (2016).

is a lecturer in Middle East politics and international relations at the Department of Politics and Government, Ben Gurion University of the Negev. He was a research fellow at the Council for British Research in the Levant and has been a recipient of British Academy grants. Nasasra is the author of The Naqab Bedouins: A Century of Politics and Resistance (2017). He is also co-editor of The Naqab Bedouin and Colonialism: New Perspectives (2015).

"This volume offers valuable critical perspectives on the complexities of cities in the Middle East and North Africa. Centering on the production of knowledge about the region, the authors address thorny topics, ranging from geopolitics to the continuing impact of colonial policies, memory, ethnicity, religion, everyday life, and violence. The Handbook is comprehensive, useful, and provocative." – Zeynep Çelik, New Jersey Institute of Technology, USA

"The many critical essays in this volume restore the status of the Middle Eastern cities on their own terms, instead of measuring them by the Western ‘model’. The critical approach and the wide-ranging issues discussed in the book—from space, culture, cosmopolitanism, to social movements, colonialism, and Tourism—offer a productive lens to understand the urban reality of the Middle East while engaging with the field of urban studies in general. A valuable resource book." – Asef Bayat, University of Illinois, USA