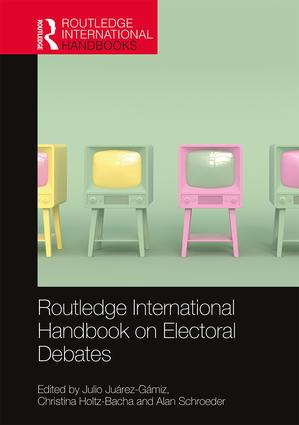 This Handbook is the first major work to comprehensively map state-of-the-art scholarship on electoral debates in comparative perspective. Leading scholars and practitioners from around the world introduce a core theoretical and conceptual framework to understand this phenomenon and point to promising directions for new research on the evolution of electoral debates and the practical considerations that different country-level experiences can offer.

Three indicators to help analyze electoral debates inform this Handbook: the level of experience of each country in the realization of electoral debates; geopolitical characteristics linked to political influence; and democratic stability and electoral competitiveness. Chapters with examples from the Americas, Europe, Africa and the Middle East, Asia and Oceania add richness to the volume. Each chapter:

• Traces local historical, constitutive relationships between traditional forms of electoral debates and contexts of their emergence;

• Compares and critiques different perspectives regarding the function of debates on democracy;

• Probes, discusses and evaluates recent and emergent theoretical resources related to campaign debates in light of a particular local experience;

• Explores and assesses new or neglected local approaches to electoral debates in a changing media landscape where television is no longer the dominant form of political communication;

• Provides a prospective analysis regarding the future challengers for electoral debates.

will set the agenda for scholarship on the political communication for years to come.

"Those planning to produce or research political debates will welcome a comprehensive update outlining the happenings in the International Debate arena. This volume offers practical insights for those engaging political debates as part of applied Democracy." — Allan Louden, Department Chair and Professor of Communications, Wake Forest University

"The Handbook illustrates the exponential growth of political debates worldwide over the past twenty years. Regardless of world region, political structure, or cultural differences, there are universal rules, impacts, and challenges. There are also significant differences influenced by a variety of factors. The Handbook fills a major void in the literature for anyone teaching or studying political debates and for anyone advising debate sponsors." — Diana B. Carlin, Professor Emerita, Saint Louis University

Part 1: Electoral Debates in the Americas

Introduction to Electoral Debates in the Americas

2. A New Experiment for an Old Media Political Event: Leaders’ Debates in Canada

3. From JFK to Trump: The Evolution of U.S. Presidential Debates

4. Did video kill the rally star? The contribution of presidential debates to democratic change in Mexico

6. Presidential Debates in Colombia. From Rarity to Routine

14. From the heavyweights' debate to the duel: the development of TV debates in Germany

15. Road to the Stadium: Televised Election Debates and "Non-Debates" in Ukraine. Between Spectacle and Democratic Instrument

18. Electoral debates in Spain: from TV to social networks

Introduction to select cases of electoral debates across different regions

21. Transformation of the Electoral Debate in Japan: Its Content and Context

27. Political showmanship: A critical analysis of electoral debates in Kenya

28. Do Debates Matter? The Past, Present and Future of Nigerian Electoral Debates

Julio Juárez-Gámiz is an associate researcher at the National Autonomous University of Mexico (UNAM). He has lectured on topics ranging from political communication, electoral law, journalism, discourse analysis, media and mass communication theories at different Mexican and English Universities. Julio has coordinated different national and multicultural studies on campaigns and elections, media coverage and political communications funded by the National Electoral Institute, IBOPE/AGB (now Nielsen-Ibope), the United Nations Development Program and the Mexican Secretary of State. He served as advisor to the President of the National Electoral Institute from 2015 to 2018.

is Professor Emeritus in the School of Journalism at Northeastern University and has worked as a journalist, television producer, and diplomat. Schroeder has written about a variety of media-related topics for such outlets as Politico, the New York Times, Washington Post, Boston Globe, Huffington Post, and Frankfurter Allgemeine Zeitung. His work in media and politics extends internationally. He has lectured about the global phenomenon of televised debates in Spain, Germany, Denmark, the Netherlands, and Colombia. He has also trained television reporters and producers in the South Pacific and addressed journalists from China, Afghanistan, Uzbekistan, and various countries in Latin America.