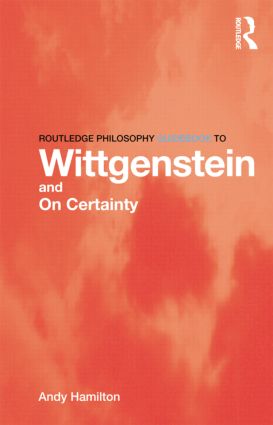 Routledge Philosophy GuideBook to Wittgenstein and On Certainty

Ludwig Wittgenstein is arguably the most important philosopher of the twentieth century. In On Certainty he discusses central issues in epistemology, including the nature of knowledge and scepticism. The Routledge Philosophy Guidebook to Wittgenstein and On Certainty introduces and assesses:

This GuideBook is essential reading for all students of Wittgenstein, and for those studying epistemology and philosophy of language. On Certainty, Wittgenstein's final work, addresses a category of "world-picture" propositions discovered by G.E. Moore. These challenge Wittgenstein's enduring commitment to a well-defined category of empirical propositions, and help to generate a critique of scepticism. Developing Wittgenstein's view that scepticism is self-undermining, the Guidebook offers a combative yet therapeutic interpretation that locates On Certainty between the standpoints of Kant and Hume.

'Wittgenstein wrote, "Philosophy is not a body of doctrine but an activity… [of] clarification". He shows us paths from metaphysical abstraction to the more habitable, yet largely unrecognised, world of our everyday lives. But how does this therapeutic conception infuse the enigmatic epistemological writings known as On Certainty? As a guide, Hamilton is precisely the sort of reader Wittgenstein would have wanted, one fully engaged in thinking with, and against, the text. Hamilton’s Wittgenstein is a humanist who rejects the current orthodoxy that models philosophy on the natural sciences. By demonstrating the power of the text to stimulate his own thoughts, Hamilton encourages us to think with the text ourselves.' - David Macarthur, Sydney University, Australia

Andy Hamilton teaches Philosophy at Durham University, UK. His books include Aesthetics and Music (2007), Lee Konitz (2007) and The Self in Question: Memory, the Body and Self-Consciousness (2013). He also teaches aesthetics and history of jazz at Durham, and contributes to The Wire magazine.