Royalist Agents, Conspirators and Spies
Their Role in the British Civil Wars, 1640–1660 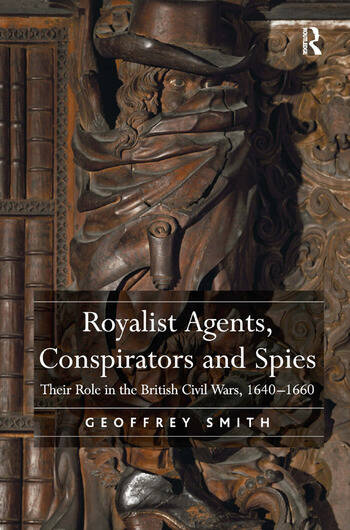 Royalist Agents, Conspirators and Spies: Their Role in the British Civil Wars, 1640–1660

Between 1640 and 1660 the British Isles witnessed a power struggle between king and parliament of a scale and intensity never witnessed, either before or since. Although often characterised as a straight fight between royalists and parliamentarians, recent scholarship has highlighted the complex and fluid nature of the conflict, showing how it was waged on a variety of fronts, military, political, cultural and religious, at local, national and international levels. In a melting pot of competing loyalties, shifting allegiances and varying military fortunes, it is hardly surprising that agents, conspirators and spies came to play key roles in shaping events and determining policies. In this groundbreaking study, the role of a fluctuating collection of loyal, resourceful and courageous royalist agents is uncovered and examined. By shifting the focus of attention from royal ministers, councillors, generals and senior courtiers to the agents, who operated several rungs lower down in the hierarchy of the king's supporters, a unique picture of the royalist cause is presented. The book depicts a world of feuds, jealousies and rivalries that divided and disorganised the leadership of the king's party, creating fluid and unpredictable conditions in which loyalties were frequently to individuals or factions rather than to any theoretical principle of allegiance to the crown. Lacking the firm directing hand of a Walsingham or Thurloe, the agents looked to patrons for protection, employment and advancement. Grounded on a wealth of primary source material, this book cuts through a fog of deceit and secrecy to expose the murky world of seventeenth-century espionage. Written in a lively yet scholarly style, it reveals much about the nature of the dynamics of the royalist cause, about the role of the activists, and why, despite a long series of political and military defeats, royalism survived. Simultaneously, the book offers fascinating accounts of the remarkable activities of a number of very colourful individuals.

Geoffrey Smith was Head of History at Melbourne Grammar School for a number of years. He is now an Honorary Research Fellow in the School of History at the University of Melbourne. He is the author of The Cavaliers in Exile, 1640-1660 (2003) and of several articles on the royalists. He is currently working on a contribution to a planned collection of essays on the courtier, playwright and theatre manager, Thomas Killigrew.

'This book is full of fine story-telling which transforms our knowledge of some familiar acts of heroism and skullduggery at the heart of the Wars of the Three Kingdoms and which tells us a whole lot of new and startling stories. Altogether it will change how we should look at royalism and loyalism in this great crisis of British monarchy.' John Morrill, University of Cambridge, UK 'This work offers a thrilling narrative of the shady business of royalist spies and agents over the whole Civil War and Interregnum period. The bravery, optimism and pragmatism of these indefatigible failures is ably highlighted, along with their importance in sustaining the concept of royalism through its darkest times.' Andrew Hopper, University of Leicester, UK 'Geoffrey Smith has established himself, over the past quarter of a century, as the leading expert on the exiled royalists of the British Civil War period... [his latest work] is a book that both fills out our knowledge of the age and events concerned and augments the history of espionage and secret diplomacy.' Ronald Hutton, Intelligence and National Security 'Recommended.' Choice 'Overall, Smith's study has much to offer scholars working on royalism, the British Civil Wars, and seventeenth-century intelligence gathering and plotting. The book also presents a lively and enjoyable read for the nonspecialist.' Parergon 'Smith's book is both enjoyable and enlightening, and it may lead historians to reflect further on the nature of human agency in shaping events.' Journal of British Studies ’This is a fascinating and absorbing account... It highlights the increasing importance of underground Royalist activity as the Stuart monarchs failed to regain their kingdoms. It also gives an insight into how the Royalist effort was organised and managed, especially the Royalists’ ability to communicate across counties, countries and even continents. It demonstrates the diverse backgrounds of Royalist agents and shows their cause was