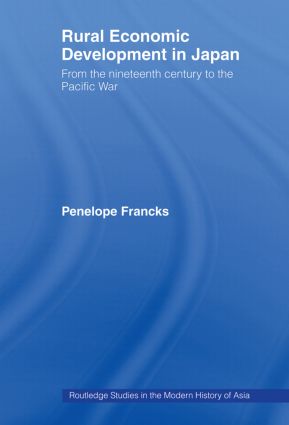 From the Nineteenth Century to the Pacific War, 1st Edition

In the historical literature on Japan, rural people have tended to be regarded as the exploited victims of the industrialisation process. This book provides an alternative view of the role and significance of the rural economy in Japan’s emergence as an economic power prior to World War II.

Using theories and approaches derived from development studies and economic history the book describes the nineteenth-century development of a diversified, proto-industrial rural economy, focusing on the strategies employed by households as they sought to secure and improve their livelihoods. The book argues that rural people, through their ‘industrious revolution’, played an active part in determining the course of Japan’s agrarian transition and, eventually, the distinctive features of industrial Japan’s political economy, with the result that rural life still figures largely in the reality and imagination of contemporary Japan.

'Francks challenges the image of Japanese farmers as victims of industrialization. Applying the tools and concepts devised for analyzing economic development in the contemporary Third World and other micro-level research, she portrays them as post-peasant small-scale producers who exploit both the knowledge of their agricultural environment and whatever scope their household resources allows them for securing and improving their livelihoods.' - Reference & Research Book News

'Useful and thorough book…I would happily assign this one to my students.' - Monumenta Nipponica

'Penelope Francks has written a fine overview of the history of Japanese agriculture from the late Edo period until 1945. Drawing on a wide variety of English and Japanese-language secondary sources, she has made important contributions to our understanding of modern Japan, and of its economic and rural development.'

'A reader who wants to read a synthesis of Japanese agricultural development from 1800 to the Second World War, that is, just before and during Japan’s prewar industrialization, can do no better than turn to this book.'

'Despite a vast body of research on the Japanese countryside, few English-language scholars have been bold enough to attempt a comprehensive history of rural Japan in the modern era. Penelope Francks has written an excellent book with a reach that extends far beyond its economic focus, offering an outstanding synthesis of the Japanese- and English-language scholarship on the Japanese countryside in the nineteenth and early twentieth centuries. The variety and complexity of the issues Francks tackles is awe inspiring." -- Simon Partner, Journal of Japanese History, V. 34, No. 1, 2008