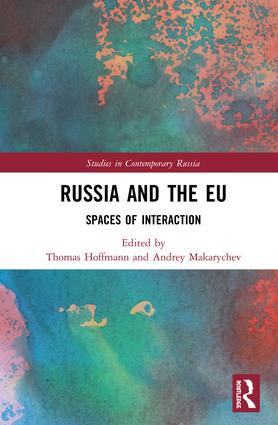 Russia and the EU

The annexation of Crimea in 2014 and Russia’s support for military insurgency in eastern Ukraine undermined two decades of cooperation between Russia and the EU leaving both sides in a situation of reciprocal economic sanctions and political alienation. What is left of previous positive experiences and mutually beneficial interactions between the two parties? And, what new communication practices and strategies might Russia and Europe use?

Previously coherent and institutionalized spaces of communication and dialogue between Moscow and Brussels have fragmented into relations that, while certainly not cooperative, are also not necessarily adversarial. Exploring these spaces, contributors consider how this indeterminacy makes cooperation problematic, though not impossible, and examine the shrunken, yet still existent, expanse of interaction between Russia and the EU. Analysing to what extent Russian foreign policy philosophy is compatible with European ideas of democracy, and whether Russia might pragmatically profit from the liberal democratic order, the volume also focuses on the practical implementation of these discourses and conceptualizations as policy instruments.

This book is an important resource for researchers in Russian and Soviet Politics, Eastern European Politics and the policy, politics and expansion of the European Union.

"Hoffmann and Makarychev’s volume provides a compelling and in-depth account of the dramatic deterioration of EU-Russia relations. As post-Cold war models of the relationship fade, this book provides all those wishing to make sense of the new normal in EU-Russia relations with an essential chart to navigate the complexities of a fragmented relationship, which is neither cooperative nor, however, always conflictual." - Nathalie Tocci, Director of the Istituto Affari Internazionali and Honorary Professor at the University of Tübingen

The EU and Russia: space of interaction in times of crisis: an introduction

Part I Cultures and philosophies

6. The political discourse of the Kremlin in Spain: channels, messages, and interpretive frameworks

7. Russia’s strategy of influence in Europe: a French case study

8. Russian threat as a push factor in the European integration discourse in Poland

9. The European Union and Russia in the contested South Caucasus: how to move forward

Part III Legal norms and practices beyond the (EU)rope

10. Defending its rights or testing the limits? Trade relations and disputes between Russia and the EU before and after the Ukraine crisis

11. Who may sail the Arctic? Russia’s and the EU’s perspectives on the legal status of the Northern sea route

12. The institution of citizenship and practices of passportization in Russia’s European neighbourhood policies

How to study and teach anew EU– Russia relations: a methodological conclusion in seven points

Andrey Makarychev is Guest Professor at the Johan Skytte Institute of Political Science, University of Tartu.

Studies in Contemporary Russia is a series of cutting-edge, contemporary studies. These monographs, joint publications and edited volumes branch out into various disciplines, innovatively combining research methods and theories to approach the core questions of Russian modernisation; how do the dynamics of resources and rules affect the Russian economy and what are the prospects and needs of diversification? What is the impact of the changing state-society relationship? How does the emerging welfare regime work? What is the role of Russia in contemporary international relations? How should we understand the present Russian political system? What is the philosophical background of modernisation as a whole and its Russian version in particular? The variety of opinions on these issues is vast. Some see increasingly less difference between contemporary Russia and the Soviet Union while, at the other extreme, prominent experts regard Russia as a 'more or less' normal European state. At the same time new variants of modernisation are espoused as a result of Russian membership of the global BRIC powers. Combining aspects of Western and Soviet modernisation with some anti-modern or traditional tendencies the Russian case is ideal for probing deeper into the evolving nature of modernisation. Which of the available courses Russia will follow remains an open question, but these trajectories provide the alternatives available for discussion in this ground-breaking and authoritative series. The editor and the editorial board of the series represent the Finnish Centre of Excellence in Russian Studies: Choices of Russian Modernisation.