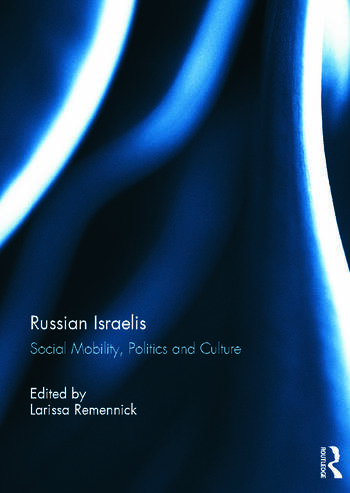 Israelis with a Russian accent have been part of Israel's social, cultural and economic landscape for over 20 years.  They are found in all walks of life: as controversial politicians, senior physicians and scientists, kibbutz members and religious settlers. Despite lacking personal assets and below-average income, many of them managed to enter Israeli middle class, and some even became part of local elites – an achievement not to be taken for granted for the first-generation immigrants. This collection offers a multi-faceted portrait of the 'Great Russian Aliyah' of the 1990s with the emphasis on socio-political and cultural aspects of its insertion in Israel – based on social research conducted by the scholars most of whom are former-Soviet immigrants themselves. The issues covered include the exploration of Israel as an extension of the post-soviet space; the evolving political culture of Russian Israelis; the prospects for the ethnic media and Russian language continuity; visual tokens of 'domestication' of a major Israeli city by its 'Russian' residents, and mutual influences between Israeli and Russian cinematic traditions. Written in a lively and non-technical manner, most contributions will spark interest among both social scientists and broad readership interested in modern-day Israel and post-Soviet societies.

This book was originally published as a special issue of Israel Affairs.

1. Twenty years together: the ‘Great Aliya’ and Russian Israelis in the mirror of social research, Larissa Remennick.  2. Who went where? Jewish immigration from the Former Soviet Union to Israel, the USA and Germany, 1990 – 2000, Yinon Cohen, Yitchak Haberfeld and Irena Kogan.  3. ‘Russians’ in Israel as a post-Soviet subject: implementing the civilizational repertoire, Julia Lerner.  4. Old values in the new homeland: political attitudes of FSU immigrants in Israel, Michael Philippov and Anna Knafelman.  5. Russian-Jewish political experience in Israel: patterns, elites and movements, Vladimir (Ze’ev) Khanin.  6. Russian-speaking immigrants and their media: still together?, Nelly Elias.  7. Cultural practices and preferences of ‘Russian’ youth in Israel, Marina Niznik.  8. How long is ‘the Russian street’ in Israel? Prospects of maintaining the Russian language, Shulamit Kopeliovich.  9. ‘Non-Jewish and Christian’: perceived discrimination and social distance among FSU migrants in Israel, Rebeca Raijman and Janina Pinsky.  10. Immigrants in the city: from exploration to domestication, Larisa Fialkova and Maria Yelenevskaya.  11. ‘Is Israel part of Russia?’ Immigrants on Russian and Israeli screens, Olga Gershenson.

Larissa Remennick is Professor of Sociology at Bar-Ilan University in greater Tel-Aviv. She was educated in Russia and in the UK (Ph.D. at the Institute of Sociology, Moscow, 1988, followed by post-doctoral fellowship at Oxford University, 1989) and migrated to Israel in 1991. Her research interests include immigration, integration and ethnic relations in general, as well as Jewish identity, emigration and Russian-Jewish global diaspora specifically. Her most recent book is Russian Jews on Three Continents: Identity, Integration, and Conflict (Transaction, 2007).