Russia's Plato
Plato and the Platonic Tradition in Russian Education, Science and Ideology (1840–1930) 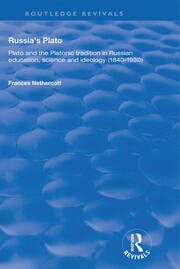 Russia's Plato: Plato and the Platonic Tradition in Russian Education, Science and Ideology (1840–1930)

This title was first published in 2000. This work identifies the differences between the Russian intellectual approach to reading Plato and that of other European countries. This study offers a complex perspective on Russian philosophical learnings up to 1930. The book contains five chapters with the first aiming to provide the general institutional context in which Russian 19th century Plato scholarship developed, caught as it were, between the rise of the historical sciences and the heavy hand of state interference in standardizing the educational system in the name of nation building and modernization. The second chapter attempts to illustrate how Plato served as a reference in Russian philosophical culture and the third deals with aspects of Russian philosophy of law. In the fourth chapter, the author shifts his approach to compare and contrast a number of reactions to a single dialogue, the "Republic" and in the final concluding chapter, addresses the question of whether it is legitimate to speak of a Russian Platonism.

Introduction; The development of Plato scholarship in 19th century Russia: From an ’orthodox ethics’ to the pragmatism of reform and counter reform; Compromise and conflict: the scientific community and the State; Developments in the historical and philosophical sciences: i.History of philosophy, ii.Trends in historiography; Russian Plato scholarship: The ’Plato question’; Plato and Russian idealism: the Platonic impulse in the construction of a philosophical tradition; From ’integral knowledge’ to the ’ideal real’: the Slavophiles and their successors; Plato, the ’father of idealism’: i.’On the necessity and possibility of new principles in philosophy’ (Ivan Kireevskii); ii.’Concrete idealism’, (Sergei Trubetskoi); Plato as a contemporary of Kant: i.Kant and Plato in the theological academy; ii.Plato and Kant: the ’plus’ and ’minus’ in the European Philosophical tradition, (Pavel Florenskii); iii.Plato’s doctrine of reason versus Kant’s theory of experience, (Pamfil Iurkevich); iv.The neo-Kantian recovery of Plato; Plato as an impulse in Russian philosophy of law: Reforming justice in late imperial Russia; Teaching justice: between western science and domestic needs; Past philosophies for a contemporary science of law: Plato and Kant as two paradigms in juridical thought; i.Plato as a philosopher of natural law/justice; ii.Plato and/or Kant: duty versus the good; iii.Justifiying the common good: from subjective to objective ethics; iv.Between Plato and Kant; Law, society and the State; Russian liberalism: nostalgia for the ideal city?; Russians reading the Republic: Teaching the Republic; Interpreting the Republic; Confronting Western scholarship: ’classical’ versus ’modernizing’ trends; The actuality of the Republic: education and the woman question; i.Plato, the teacher (Nastoiashchii Uchitel’); ii.Sexual equality, solidarity, or a ’stud farm’;? A question of Utopia-nism; i.Terrestrial Utopia; ii.Dis

’Frances Nethercott, a frequent visitor to Russia, has written an important book which gives more than just a scholarly description of the reading of Plato: it offers a sensitive and important insight into Â Russian intellectual life in the nineteenth and early twentieth centuries. I recommend it to not only Russianists but all European intellectual historians.’ Constance Blackwell, President of the International Society for Intellectual History 'At the conclusion of this well-researched, nuanced, and clearly written monograph in intellectual history, Frances Nethercott asks if there was a "Russian Platonism" distinct from "the interpretations produced by, say, the early Christians, the Renaissance, the Cambridge School, German idealism, or indeed, neo-Kantianism but which might be rightfully included in such a list of Platonic revivals?"...The book has many merits. It justifiably passes over the "intellectual silence" of old Russia... It is academically rigorous in the basics, the history of translations of each dialogue, the biographies...the publications of Russians in the field of ancient history, thought, and law, and in its survey of the mountainous corpus of western classical scholarship... It gives full credit to the intellectual vitality and importance of the theological academies so often neglected in traditional Russian intellectual history.' Slavic Review '... this book is full of interesting ideas and arguments, and I recommend it to those interested in Plato's scholarship.' International Studies in Philosophy