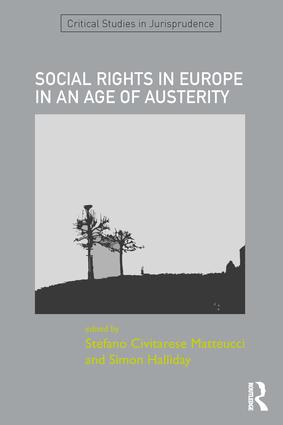 SOCIAL RIGHTS IN EUROPE IN AN AGE OF AUSTERITY

This collection of essays examines the promise and limits of social rights in Europe in a time of austerity. Presenting in the first instance five national case studies, representing the biggest European economies (UK, France, Germany, Italy and Spain), it offers an account of recent reforms to social welfare and the attempts to resist them through litigation. The case studies are then used as a foundation for theory-building about social rights. This second group of chapters develops theory along two complementary lines: first, they explore the dynamics between social rights, public law, poverty and welfare in times of economic crisis; second, they consider the particular significance of the European context for articulations of, and struggles over, social rights. Employing a range and depth of expertise across Europe, the book constitutes a timely and highly significant contribution to socio-legal scholarship about the character and resilience of social rights in our national and regional constitutional settings.

8 Should a minimum income be unconditional?

9 The social dimension of fundamental rights in times of crisis

10 Social rights and welfare reform in times of economic crisis

13 Free movement of persons and transnational solidarity in the European Union (EU): a melancholic eulogy

Stefano Civitarese Matteucci is Professor of Public Law at the University of Chieti-Pescara, Italy.

The Critical Studies in Jurisprudence Series provides a forum for interdisciplinary study in the philosophical, political and sociological traditions of thinking about the law. It is these linkages and intersections that the series sets out to chart and explore, in the tradition of research undertaken in the Law Schools of Edinburgh and Glasgow for over twenty years. The series covers a broad field that includes legal reasoning and the ethics of rule following, public law and democratic theory, socio-legal studies and the sociology of punishment, crime, crime control and policing, the politics of transitional justice, as well as the sociology and anthropology of law. The Series places special emphasis on the function of law in its political dimension and with it, in the uses of critical legal theory, capturing something significant of the orientation and the priorities that animate research and teaching in both Law schools.