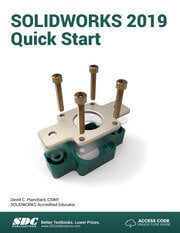 introduces the new user to the basics of using SOLIDWORKS 3D CAD software in five easy lessons. This book is intended for the student or designer that needs to learn SOLIDWORKS quickly and effectively for senior capstone, machine design, kinematics, dynamics, and other engineering and technology projects that use SOLIDWORKS as a tool. Engineers in industry are expected to have SOLIDWORKS skills for their company’s next project. Students need to learn SOLIDWORKS without taking a formal CAD course.

Based on years of teaching SOLIDWORKS to engineering students, SOLIDWORKS Quick Start concentrates on the areas where the new user improves efficiency in the design modeling process. By learning the correct SOLIDWORKS skills and file management techniques, you gain the most knowledge in the shortest period of time.

You develop a mini Stirling Engine and investigate the proper design intent and constraints. The mini Stirling Engine is based on the external combustion, closed cycle engine of Scottish inventor Robert Stirling. In addition to 3D modeling, the engine can be used to teach and connect many engineering and physics principles.

David Planchard is the founder of D&M Education LLC. Before starting D&M Education, he spent over 27 years in industry and academia holding various engineering, marketing, and teaching positions. He holds five U.S. patents. He has published and authored numerous papers on Machine Design, Product Design, Mechanics of Materials, and Solid Modeling. He is an active member of the SOLIDWORKS Users Group and the American Society of Engineering Education (ASEE).