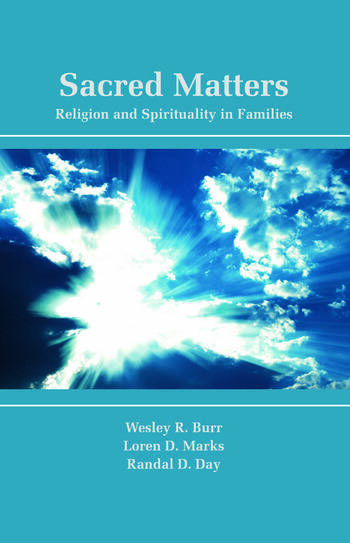 Sacred Matters explores the multi-disciplinary literature about the role of religion in family life and provides new research and a new theory about ways various aspects of the sacred are helpful and harmful. The authors hope that their new conceptual framework will stimulate new research and encourage the creation of new intervention programs designed to help families.

This book raises the bar in creating new theories about family processes and in the integration of theory, research, and application. It begins with a review of the previous literature and then expands the research about sanctification to create a new general theory (or model) about ways sacred processes help and hinder families. Next the authors expand the theory and research about the role of forgiveness, sacrifice, and prayer in families. New theory and research are then added about loving, coping with conflict, dealing with undesirable behavior, generational relationships, morality, and the psychosocial aspects of religion. The authors then describe ways sacred theory can be integrated with other theories and ways it provides new explanations about broader social problems. The book concludes with new quantitative research and suggestions for future research.

Researchers, practitioners, and advanced students in several disciplines will find this volume valuable. It will expand and enrich the reading in graduate and advanced undergraduate courses in areas such as family studies, human development, marriage and family therapy, the psychology of the family and the psychology of religion, the sociology of the family and the sociology of religion, pastoral counseling, anthropology, and social work.

Wesley R. Burr is Emeritus Professor of Family Life at Brigham Young University, Utah, USA. He received his Ph.D. from the University of Minnesota, USA. A former President of the National Council on Family Relations and the Utah Council on Family Relations, Dr. Burr was an editorial board member of many prominent journals in family studies. He has authored, co-authored, or edited 15 books and he has written numerous journal articles as well as manuals for enrichment programs, instructor manuals, and student workbooks. His research focuses on the development and application of family theories. He has been invited to give lectures in many parts of the United States and Europe on family theories, educational methods, and methods of improving family life.

Loren D. Marks, Ph.D., CFLE, holds the Kathryn Norwood and Claude Fussell Alumni Professorship in the College of Agriculture and is an Associate Professor in the Family, Child, and Consumer Science Division of Louisiana State University, USA. He received his Ph.D. in Family Studies from the University of Delaware in 2002. He also works with the LSU Ag Center’s Parents Preparing for Success Program (PPSP). Since beginning his work at LSU in 2002, Dr. Marks has centered his research efforts on a national qualitative study of faith and families. He has authored more than 40 research publications on family life, including recent work that has received national media attention from diverse outlets including The Washington Times and Black Entertainment Television. In 2008, he was named an LSU Rainmaker (Top 100 LSU Research Faculty), and in 2009 he was honored as the Sedberry Outstanding Undergraduate Teacher in the LSU College of Agriculture.

Randal D. Day is a Professor in the School of Family Life at Brigham Young University, Utah, USA, where he received his Ph.D. in Family Sciences. His research and teaching interests focus on family processes, father involvement , and family influence on the emergence of positive virtues such as forgiveness. He has authored or co-authored more than 70 research articles and books. His book publications include Conceptualizing and Measuring Father Involvement with Michael Lamb; Fatherhood: Research, Interventions and Policies and Introduction to Family Processes, Fifth Edition. He is a Fellow of the National Council on Family Relations, Director of the Family Studies Center at Brigham Young University, and past Associate Director of the School of Family Life. Randy is currently the principle investigator for a large scale longitudinal survey of 700 families called the Flourishing Families Project (FFP). To date the FFP has interviewed 687 families for five consecutive years (2007-2011).

"Finally – a comprehensive family theory that addresses what millions of families find central to their lives – spirituality and religion. Sacred Matters will be the launch pad for decades of research on faith and families. I am developing a course called "Family Spirituality." Sacred Matters is sure to be one of my primary texts for the course." – Chris Gonzalez, Lipscomb University, USA

"This ground-breaking work is sure to become a classic. These outstanding scholars combine their expertise in theory development and empirical research to provide a volume that will serve both as a text in theory courses and as a framework for future research and theory." - Joe D. Wilmoth, Mississippi State University, USA

"This book is one of the most impressive works on family theory in decades. Its scope is quite impressive, ranging from philosophical issues to applied issues. The writing is... clear and the use of quotes from family members is refreshing... I think the authors have hit gold in their core proposition that the experience of the sacred is an important domain of family life, irrespective of religious belief or even participation." - William Doherty, University of Minnesota, USA